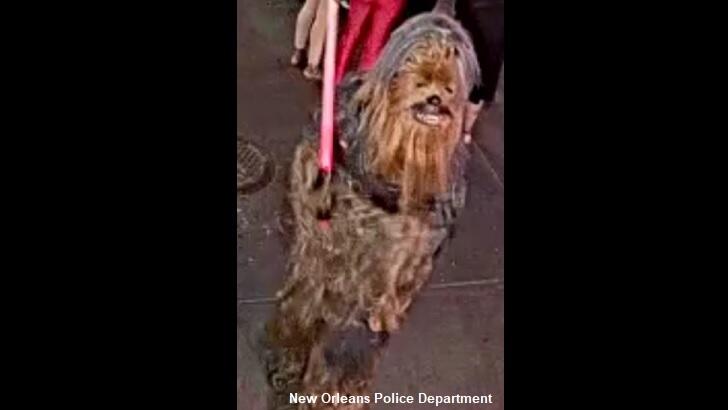 'Chewbacca' Wanted by Cops in NOLA

In an odd story out of New Orleans, authorities say a street performer dressed as Chewbacca got into an altercation with another individual and wound up stabbing them. According to a bulletin issued by police, the strange incident occurred on Saturday evening in the city's famed French Quarter. Cops say that the faux Wookiee wound up in a "verbal disagreement" with the victim that quickly escalated into a scuffle. It was during the bizarre brawl that the iconic "Star Wars" character turned to the proverbial dark side and allegedly abandoned their lightsaber in favor of a knife. Included in the announcement by the police was a picture of the performer in their Chewbacca costume (seen above).

While one might think that would make it difficult to identify the suspect, it stands to reason that there probably aren't all that many people running around the French Quarter dressed as the beloved hirsute character. Narrowing things down a bit more, cops say that the head of the costume actually fell off during the brawl and witnesses reported that the perpetrator was a man in his 20s. As one might imagine, news of the crime brought with it a slew of "Star Wars" jokes from people on social media with some suggesting that cops search "a bar in Tatooine" or perhaps "near the forest moon of Endor."