Home > Articles > China Successfully Lands Craft on the 'Dark Side' of the Moon
January 3, 2019 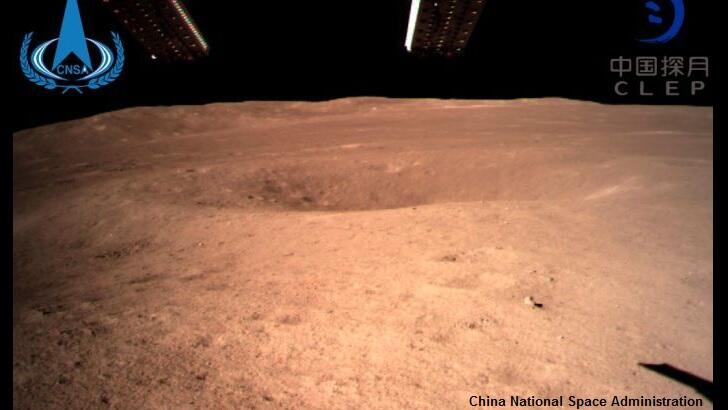 China Successfully Lands Craft on the 'Dark Side' of the Moon

China's space agency accomplished a historic feat last evening when they became the first nation to land a craft on the far side of the moon. The mysterious lunar realm, colloquially mislabeled as the 'dark side' of the moon, had heretofore only been observed by orbiting astronauts and photographed by satellites. Beyond that, the area has never explored on the ground by any space agency due to its rocky terrain and difficulties surrounding communicating with a craft located on the hemisphere which almost permanently faces away from the Earth.

Nonetheless, in an admirable accomplishment, China's Chang'e 4 craft reportedly managed to successfully land on the mysterious side of the moon and is already beaming back images from the site. Celebrating the history-making landing, the nation's space agency declared that it "opened up a new chapter in human lunar exploration." While that may sound like a bit of hyperbole, the vast array of instruments aboard the craft, which is both a lander and a rover, suggest that may not be the case.

The Chang'e 4 is equipped with multiple cameras as well as spectrometers and other sophisticated devices designed to measure various conditions on the moon such as temperature changes, the chemical composition of the ground and observations made using radio telescopes. All of this data will be transmitted to a satellite that is located between the moon and Earth and was designed to relay signals from the craft back home to China. And in a tantalizing indication of what the future may bring, the Chang'e 4 also contains a number of plants which will be studied to see how they grow while located on the lunar surface.

Due to its enigmatic nature, the 'dark side' of the moon has inspired wonder in humans for generations. It should also come as no surprise that it has also spawned a number of conspiracy theories which largely center around the hypothesis that it is 'hidden' from view on Earth due to some kind of alien agenda. Unfortunately, it appears the Chang'e 4 has yet to uncover any clandestine ET bases, but, then again, one can't imagine that China would tell us if they did.