Home > Articles > Chinese Lunar Rover Finds Puzzling 'Gel' on the Dark Side of the Moon
September 3, 2019 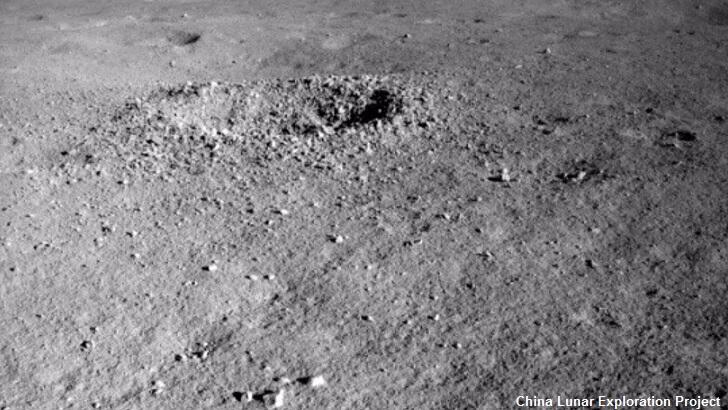 Scientists manning the Chinese lunar rover on the 'Dark Side' of the moon were stopped in their tracks when the craft spotted a strange gel-like substance inside of a small crater. The intriguing find occurred after the rover, dubbed 'Yutu-2,' had finished exploring for the day and was being powered down for a regularly scheduled 'nap' aimed at preserving the craft during particularly harsh conditions on the moon. As this process was unfolding, a scientist on the team examined images taken by the craft and noticed something highly unusual.

As recounted by a Chinese media outlet, the rover had photographed "a gel with a mysterious luster" that was "significantly different from the surrounding lunar soil." In what sounds like a remarkable scene, the puzzling find elicited considerable excitement and discussion among the people in the room "but no one gave the answer" as to what the substance was. They quickly contacted their superiors at the Chinese space agency to tell them about the anomaly and "rigorously argued" that they should take a closer look at it.

In a credit to the Chinese space agency, the team was actually given the green light to change the mission plan, which called for the rover to head west, and, instead, they were allowed to "turn to detect mysterious substance." Upon arriving at the crater in question, Yutu-2 examined the oddity with a highly advanced spectrometer. Alas, as of now, the scientists behind the mission have not revealed what the weird substance could have been, but one theory put forward by astronomers is that it was a glassy geological condition exhibited when rock is melted due to the impact of a meteorite.