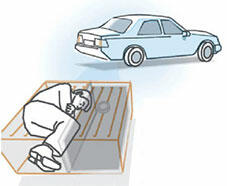 In the 1950s, professional magician John Mulholland wrote a manual to teach CIA spies the art of deceit. Now declassified, Mulholland's instructions have been published as The Official CIA Manual of Trickery and Deception (by H. Keith Melton and Robert Wallace).

The Boston Globe has created a photo gallery of some of Mulholland's best tricks used by the Agency during the Cold War. One technique, based on the classic 'sawing a woman in half' illusion, allowed the CIA to transport a spy out of Eastern Europe inside a modified fuel tank. More at Boston.com.

Brazilians in Magé reported seeing mysterious aerial objects on May 13. Several videos sparked speculation about a crashed UFO. Esoteric researcher Jonny Enoch joins Jimmy Church (Twitter) to discuss the validity of this case and what...