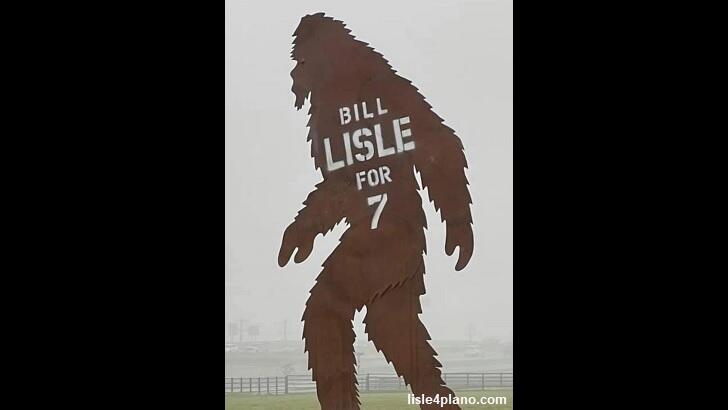 A candidate for a city council position in Texas came up with a rather clever way of capturing voters' attention by using giant Bigfoot cut-outs for campaign signs. The crytozoological concept is the brainchild of Bill Lisle, who is running for Place 7 on the city council for the community of Plano. While visiting his sister's job at a metal wholesaler that produced specialized sculptures, he spied an enormous Sasquatch piece and the inspiration struck.

His campaign subsequently placed a staggering 33 of the seven-foot-tall Sasquatch cut-outs throughout Plano with 'Bill Lisle for 7' painted on the beast's body and, later, expanded the line-up to include several medium-sized as well as a few two-foot-tall 'baby Bigfoot' as well. The candidate's reasoning for the unorthodox signage is that it conveys the kind of out-of-the-box thinking that he would bring to the city council and that the hard-to-miss pieces stand out among the otherwise mundane advertisements one normally sees in a political campaign.

So far, it would seem that the concept has been a success as numerous residents have contacted Lisle expressing appreciation for the giant Sasquatches seen around the city and pledging to vote for him in the upcoming election. One unfortunate downside to the signs is a development that may not surprise longtime C2C website readers: Bigfoot bandits. According to Lisle, he has already lost ten of the cut-outs to the sticky-fingered ne'er-do-wells, though the candidate plans to replace the missing Sasquatches with 'wanted' posters featuring the famed cryptid.