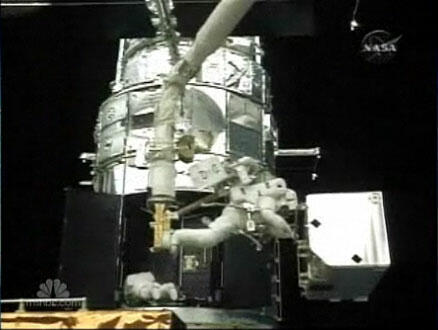 Two spacewalking astronauts, John Grunsfeld and Drew Feustel, spent six and a half hours on Saturday installing a new high-tech instrument on Hubble as well as performing complex repairs to the space telescope's broken planetary camera. The repair work is considered the most difficult ever attempted in orbit, according to NASA. Hubble will be released from Atlantis on Tuesday after additional maintenance, and is expected to function for another five to 10 years. Further info and video available at MSNBC.