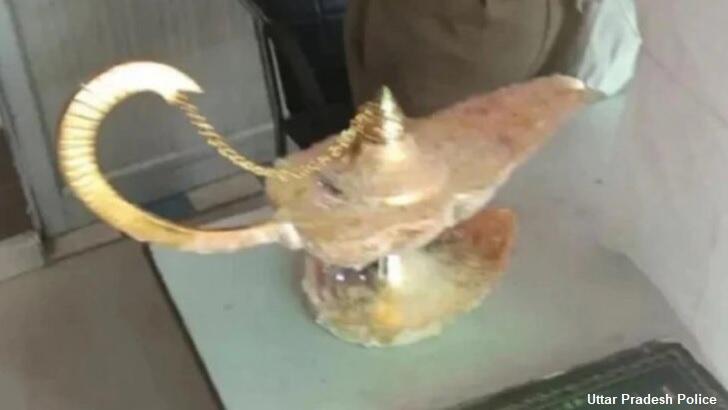 Con Artists in India Sell 'Wish-Granting' Lamp to Doctor for $41,600

Authorities in India have arrested a pair of con artists who convinced a doctor to buy a 'wish-granting' lamp from them for a whopping $41,600. The audacious caper reportedly came to light last week when Dr. LA Khan contacted the police after realizing that he had been swindled. According to the doctor, the long con began when he started treating an ailing woman and, in the process, met two men whom he was led to believe were her sons.

Over the course of several visits to their residence, the men slowly revealed to the doctor that they were in contact with a powerful 'godman' who could perform all manner of magical feats. The origin of this entity, they told Khan, was the legendary Aladdin's lamp which they just so happened to possess. In a testament to their commitment to the scheme, one of the men even went so far as to dress as the famed genie and appear before the doctor to vouch for the authenticity of the tale.

As 'luck' would have it, the men informed Khan, they were willing to sell the magical lamp and its resident genie to him for a 'mere' $200,000. Promised that the purchase would ultimately provide him with wealth beyond his wildest dreams, the doctor convinced the men to take a down payment of $41,600 for the prized item, which they graciously accepted. However, when they refused to let him take the lamp home with him, Khan began to suspect that something was amiss.

Putting the pieces together, it dawned on the doctor that he had been gradually "brainwashed" by the two men into believing that they owned a magical lamp and that, in fact, the 'Aladdin' that he met during the fantastic meeting was actually one of the con artists in a genie costume. Kahn subsequently reported the trickery to police, who arrested the two men for fraud and seized the lamp as evidence. The woman who initially ensnared the doctor turned out to be the wife of one of the con artists and is currently wanted by police for her role in the strange affair.