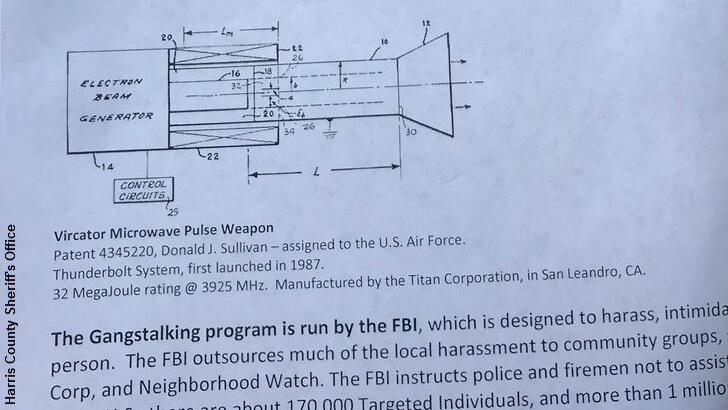 A bizarre incident in Houston last week saw a police officer hospitalized after touching what was thought to be a drug-laced flyer decrying a conspiracy theory surrounding government-sponsored microwave harassment. The strangeness started when a sergeant leaving work spotted a piece of paper that had been placed on the windshield of her cruiser as well as several other police vehicles parked nearby. Contained on the flyers was a rather complex warning about what is known as the 'Targeted Individual' conspiracy theory which essentially contends that the federal government is harassing unwitting victims using advanced technology.

According to a local media report, after picking up the paper, the sergeant presumably dismissed the missive as merely a nuisance as she proceeded to head home. However, along the way, she began feeling a variety of strange symptoms which led her to believe that she had been drugged! Authorities and a hazmat response team quickly descended on the parking lot and picked up the remaining flyers for testing which, initially, found that one of the pieces of paper had been laced with the powerful and dangerous opioid fentanyl.

Making matters all the more weirder, the sheriff's department announced a few days later that, in fact, no fentanyl had been found on the paper. The sergeant was also drug tested and her clothing from the incident was examined and, again, there was no sign of anything nefarious afoot. Authorities expressed concern that their initial test produced the troubling false positive for fentanyl and conceded that they had no idea what caused the sergeant's ailment.

For their part, the Targeted Individual advocacy group named on the flyers strenuously denied having any role in the distribution of the warnings that caused all of the chaos. In a press release issued by the organization, they offered assurances that they adhere to a strict non-violence policy. They also lambasted media coverage which had labeled them an 'antigovernment' group and pointed to a number of prominent individuals associated with the group.

This, of course, raises the question of who did leave the flyers on all of the cruisers in the parking lot. Considering the very nature of the Targeted Individual conspiracy, one can imagine that the odd event is being seen as an attempt to discredit the community. The fact that the sergeant fell ill under such mysterious circumstances will likely only further suspicions that, perhaps, she had been targeted by the very technology warned about on the flyer. Then again, as we've seen with the Flat Earth community, one cannot discount the possibility that an overzealous advocate for the conspiracy theory 'went rogue' and took upon themselves to 'sound the alarm.'

Coast Insiders can learn more about the Targeted Individual conspiracy theory by checking out the 9/27/2017 edition of C2C featuring writer Michael Fitzhugh Bell, who says that he is a victim of the harassment. Not a Coast Insider? Sign up today.