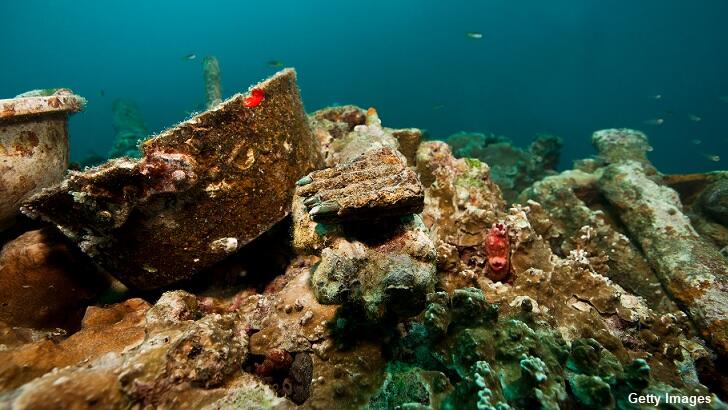 A treasure hunter in search of riches that were pilfered by the Nazis during WWII believes that a convoy of trucks loaded with the ill-gotten loot may be located at the bottom of a lake in Poland. Using geo-radar technology, Piotr Koper reportedly detected a significant amount of unexplained steel submerged in a lake in the village of Zarska Wies. The treasure hunter argues that this mysterious material could be connected to historical accounts of a 1945 incident wherein the Nazis filled a series of armored vehicles with exhibits stolen from a museum in the city of Goerlitz and sent the convoy to the nearby village. "We know from witnesses that they arrived here, on the ice-bound reservoir," Koper explained, theorizing that the trucks eventually sunk and were lost to history.

However, Koper's hypothesis was dealt something of a blow when a well-respected diver, Marcel Korkus, investigated that lake and found that while there appeared to be the remnants of a mine beneath the surface, there was no sign of the treasure-laden convoy. "I do not confirm the stories about trucks," he said, "and I believe that it is unlikely that they are lying under a large layer of sediment." Be that as it may, Koper indicated that he is hoping to get further analysis of ground-penetrating radar studies done at the site and, should they prove promising, follow the necessary legal steps to go about removing whatever the mysterious objects in the lake might be.

The quest at Zarska Wies is the latest in a series of searches for lost Nazi treasure that have made news this year, although none have proven fruitful to date. To that end, this is not the first time that Koper has made headlines with his claims of having located such riches as, back in 2015, he asserted that he had found the hiding place of the famed Nazi gold train, but his alleged breakthrough wound up being a bust. In true treasure hunter form, Koper was undeterred by the setback and, in 2019, inadvertently discovered 24 renaissance paintings hidden behind the wall of a palace in Poland. So perhaps luck is on his side with this latest search and some of the priceless riches taken by the Nazis during the war will finally be found.