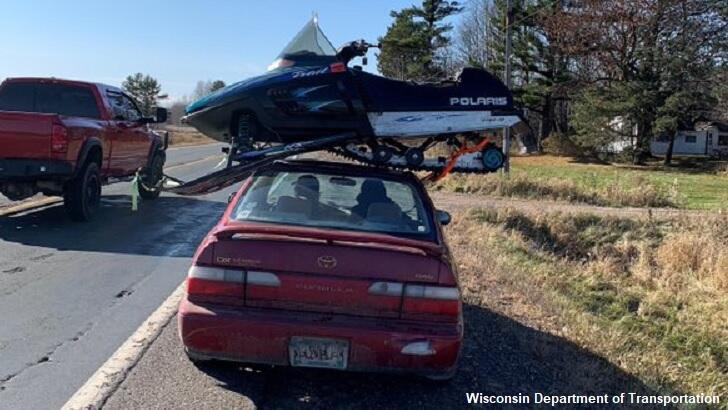 A state trooper in Wisconsin made a rather unusual stop this weekend when he pulled over a car that sported a snowmobile strapped sideways to its roof. The weird incident reportedly occurred this past Sunday afternoon along a highway in the community of Clayton. Sharing an image of the peculiar pair of vehicles on Twitter, the Wisconsin Department of Transportation cautioned "folks, don’t try this at home" and stressed that "if you’re transporting equipment this winter, you are advised to safely haul it secured on a trailer or in a truck."

Fortunately for the motorist, Matthew Schmit, he received only a warning for his unorthodox hauling method, but did get a $10 citation for not wearing a seatbelt. For his part, the young man assured a local media outlet that "I know it looks sketchy, but we had it strapped down and shook it." We're guessing that explanation would do little to assuage any drivers who happened to pull up behind Scmit's car and spot a snowmobile seemingly about to come flying at them on the highway at any moment.