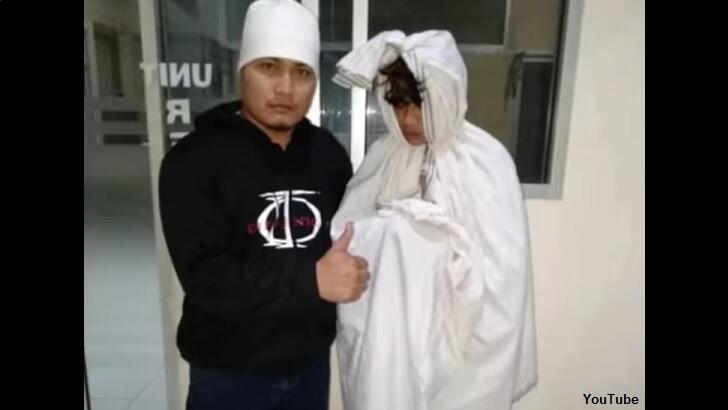 Authorities in an Indonesian city became ghost busters late Sunday morning when they caught a troublemaking teenager who had been dressing up as a spirit and scaring motorists. The strangeness reportedly began in the community of Pemalang a few days earlier when several concerned residents called the police after spotting an eerie entity on the side of the road. Specifically, they said, the apparition was a rather notorious type of spirit in Indonesian culture known as a 'pocong' or 'wrapped ghost' because the being appears shrouded in a burial cloth.

After receiving a number of reports about peculiar pocong sightings, police in Pemalang set about trying to get to the bottom of the weird calls. Eventually, after a few days of looking, cops came upon the 'ghost' during a patrol of the city and, remarkably, when the 'spirit' was initially confronted by the officers, it attempted to scare them away. However, the 'apparition' failed to frighten the police as they quickly approached the oddity and discovered that it was, in fact, a teenage boy dressed in a pocong costume.

Since the suspect is a minor, he managed to avoid being arrested for his actions, but he did receive a reprimand from the police, who noted that he could have caused a shocked driver to crash their car. For his part, the faux ghost expressed remorse for his actions and promised not to reprise the stunt. The stern lecture he got from police was a proverbial slap on the wrist compared to a teen in Malaysia that pulled the exact same prank last year and was forced by cops to 'perform' as the ghost, which infamously hops up and down due to being tightly wrapped in a burial shroud, on the side of the road.