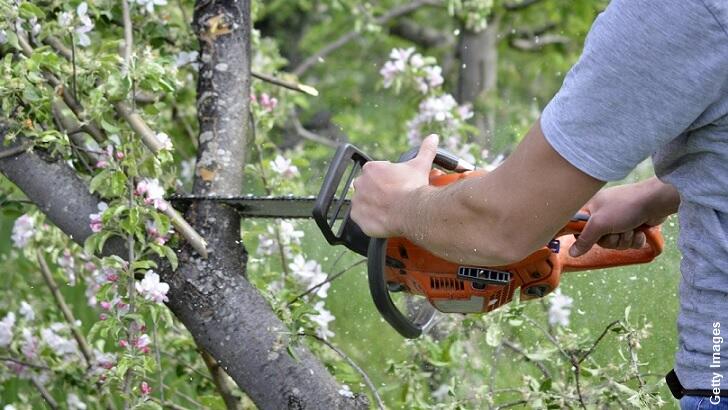 Police in England say that a proverbial phantom lumberjack is responsible for cutting down a staggering number of trees in the dead of night. The unusual case, which some have called a literal 'chainsaw massacre,' reportedly began approximately ten days ago when residents in the town of Walton-on-Thames noticed that someone had butchered several trees in their community. The weirdness quickly became a full-blown crisis when the mysterious overnight incidents continued to occur and subsequently spread to neighboring towns. As of this writing, police say that a jaw-dropping 30 trees have fallen victim to the chainsaw-wielding ne'er-do-well who operates under the cloak of darkness.

As one might imagine, the strange series of events has become the talk of the area to the point that a 'Tree Patrol' Facebook group was created to track the incidents and exchange information in the hopes of identifying the "maniac going around Weybridge, Walton-on-Thames and Cobham chopping down trees." What makes the incidents particularly perplexing is that the perpetrator apparently has no use for the wood and, upon slicing its 'victims' in half, simply leaves the limbs on the ground as something of a eerie calling card to let people know that the wounded wood was the handiwork of the phantom lumberjack. Beyond merely being an eyesore, the decimated trees also pose a safety hazard as their disconnected limbs are often left strewn across walkways and roads.

Residents of the region are understandably outraged by the antics of the phantom lumberjack as well as on edge wondering when they may strike next and, more importantly, who it could be. To that end, one person on the Facebook group smartly noted that they "wouldn't be surprised if whoever is cutting these down is also a member of this group," since the miscreant may get a sick thrill from seeing their misdeeds "splashed across social media." Meanwhile, talk of forming a posse to look for the phantom lumberjack was squashed by police, who advised residents that such a course of action could be dangerous since the person would presumably be wielding a chainsaw.