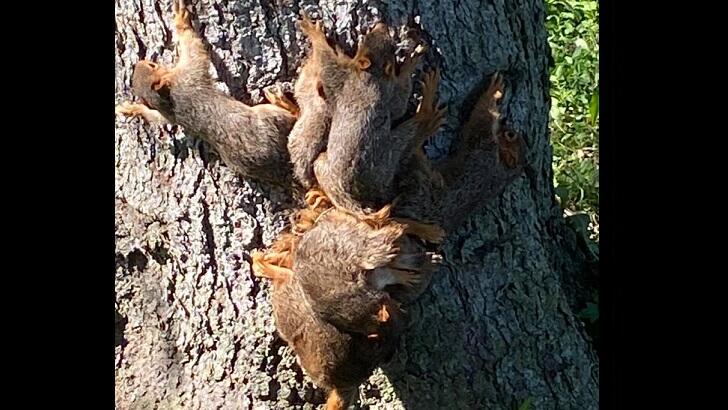 Cops in Michigan Save 'Squirrel King'

Police officers in Michigan responded to a rather odd call last week when they were enlisted to help untangle a group of squirrels that had gotten stuck together by their tails. The weird case of the relatively rare phenomenon known as a 'squirrel king,' was detailed in a Facebook post by the Grand Blanc Township Police Department on Friday afternoon. According to them, a concerned citizen called 911 to report seeing a staggering seven squirrels that had been "tied together by their tails." Upon arriving on the scene, cops confirmed the report when they found the proverbial rodent royalty near the bottom of a tree.

Observing that the animals appeared to be quite young, the department theorized that "they became entangled while in their nest" and eventually grew to the point that it could hold the squirrel king, which came tumbling to the ground to the astonishment of the person who stumbled upon the strange sight. To their credit, officers responding to the call diligently and patiently worked to free the seven diminutive creatures from their predicament all while "under the watchful eye of mama squirrel." Once free, the animals' tails were a little worse for wear, but the department indicated that they should fill in over time and that the squirrels were no worse for wear from their experience being stuck together.