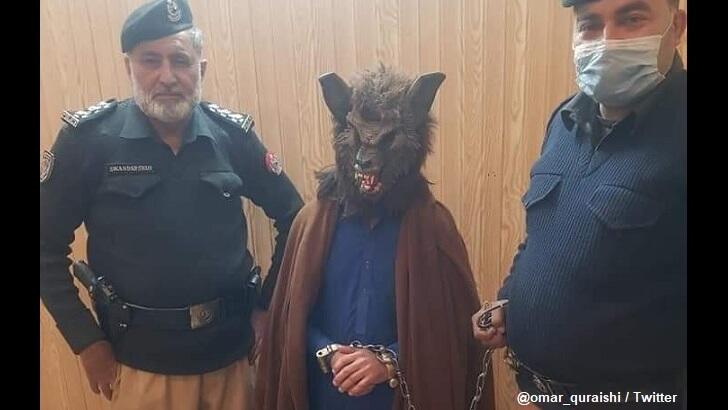 A young man in Pakistan found himself at the center of an odd controversy after cops arrested him for prowling the streets of a city on New Year's Eve while dressed as a werewolf. The strange incident reportedly occurred in the city of Peshawar last Thursday evening when the unnamed individual was spotted riding around on a motorcycle wearing a fairly realistic lycanthrope mask and allegedly roaring at bystanders in an attempt to frighten them.

Cops subsequently arrested the 'werewolf,' presumably for causing a public disturbance, and photos of the mask-clad man handcuffed and standing alongside two police officers were posted to social media shortly thereafter. The images quickly went viral in Pakistan and prompted a bit of a backlash from residents who questioned the reasoning for the man's arrest. Specifically, they noted that wearing a mask is required by law in Peshawar in order to help stop the spread of the coronavirus and therefore, technically, he was following the rules.

To that end, some people also pointed out the amusing fact that one of the police officers in the photos is not wearing a mask, which should actually be a violation of the regulations. And there were others who credited the youngster with coming up with a clever way to keep people off the streets during New Year's Eve, making him an unlikely public health hero in their eyes. It remains to be seen whether any of their points will help the young man avoid being punished for the mask misadventure.