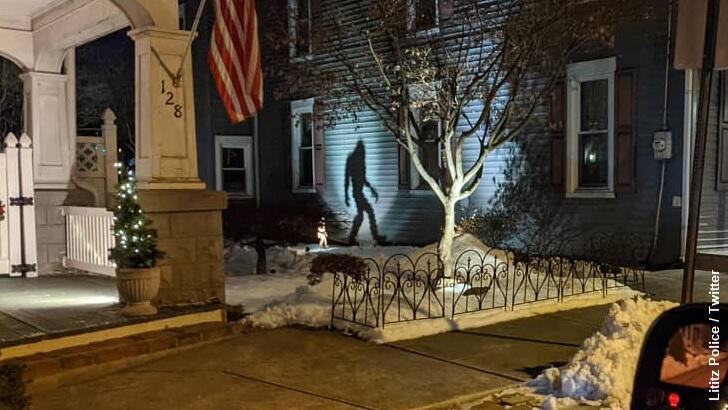 Police officers on an overnight patrol in a Pennsylvania town thought for a moment that they had stumbled upon a Sasquatch until they realized that it was merely a clever trick of light and shadow. The faux Bigfoot encounter occurred early this morning as cops in the community of Lititz were keeping an eye out for any potential scofflaws up to no good in the hours after the Super Bowl. Suddenly, much to their surprise, they noticed the shadow of a sizeable bipedal creature on the side of a house.

However, upon further inspection, cops realized that the 'Bigfoot' was actually a rather ingenious projection that was created using a well-placed spotlight and a much smaller depiction of the famed cryptid. Sharing a photo of the 'Sasquatch sighting' on Twitter, the Lititz Police Department joked that you "never know what you'll find on night shift." As one might imagine, social media users were amused by the case of mistaken identity and suggested that the sight would be sure to scare any rookie that was new to the force.

Author MR Gorga on demonic possession past and present in America, and protecting yourself against demons. Followed by C2C's Cheryll Jones who talks with biologist Laura Kearns on the recent massive bird die-offs.