Home > Articles > Coronavirus Spawns a Year Like No Other
December 28, 2020 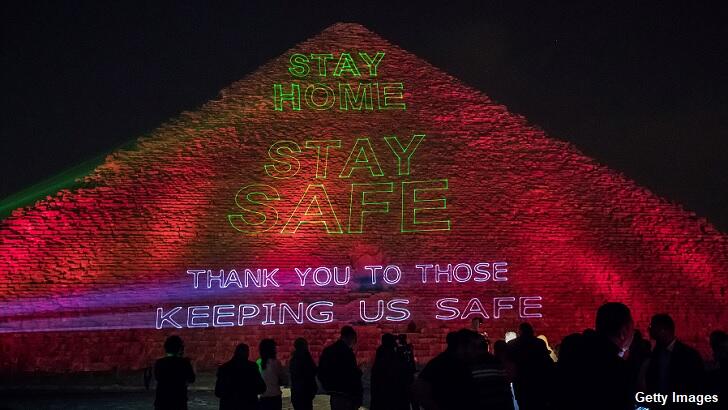 In the annals of history, 2020 will long be remembered for what has been an unimaginably turbulent time for our planet as the coronavirus pandemic swept across the globe, tragically taking hundreds-of-thousands of lives, leaving countless others sick, and transforming the world as we know it for everyone. The term 'social distancing' lodged itself in the lexicon, people gathered via online Zoom meetings rather than in-person, and face masks became either the hot fashion trend of the year or a contentious symbol of what some suspect were sinister happenings afoot. Much like the old expression 'water finds a way,' so too does weirdness, leading to all manner of strange and unusual stories being spawned by the pandemic.

Perhaps we should have foreseen the seriousness of the events to come when our first story mentioning the coronavirus in early March centered around an enormous flock of sparrows that ominously and inexplicably blocked a road in China. Shortly thereafter, the virus was nearly inescapable in the news cycle as people wondered if the late psychic Sylvia Browne had predicted the events of 2020 back in 2008 and a Ukrainian priest took to the streets with holy water to ward off the pandemic. While the world came together in the face of the unfolding crisis, as seen in a show of solidarity at the Great Pyramid, we were not without our occasional bouts of frenzy, like the Great Toilet Paper Panic which was so wild that at one point a Missouri woman actually gave birth in the soft tissue aisle of a Walmart in search of the elusive bathroom necessity.

As countries around the world tried to slow the spread of the virus, lockdowns of varying rigidity became de rigueur, giving rise to incidents like a man who donned a dinosaur costume in order to break quarantine in Spain and dystopian scenes such as drones being used to monitor people who may break social distancing guidelines. Some countries turned to the supernatural in an attempt to enforce stay-at-home orders as 'ghosts' were enlisted in Malaysia and Indonesia to scare residents who broke quarantine and were out wandering the streets. In the latter country, an actual haunted house was used as temporary housing for those who repeatedly disobeyed the rules, which proved to be a rather successful deterrent.

Although the lockdowns were undeniably inconveniencing for everyone and have undoubtedly been a source of debate as the world attempts to grapple with how best to handle the pandemic, they have provided a handful of unintended events which were rather remarkable. The expression 'nature is healing' became a theme of 2020 by way of how the planet responded to the sudden lack of human activity. This might best be exemplified by how the Himalayas were visible from India for the first time in 30 years thanks to the significant drop in air pollution or the time that a pack of wild goats took over a shuttered town in Wales. On a more unsettling front, there was also a wild monkey brawl which erupted in Thailand due to a lack of tourists providing food for the hungry simians, who soon turned on each other.

In a testament to the triumph of the human spirit, people around the world responded to the difficulties of the pandemic by way of innovative displays of creativity, such as when an opera house in Barcelona hosted a concert for over 2,000 house plants, since an actual audience was unable to attend. Shut down museums turned to social media to showcase their collections for netizens stuck behind closed doors and an Albuquerque man took to the streets to raise spirits in an alien-themed car which urged onlookers to "have patience and smile" and promising that "this will pass." Easily the most unique idea to arise in response to the challenges of the coronavirus was a clever campaign launched by the Icelandic Forestry Service, which encouraged people to "hug a tree" to combat social isolation.

To that end, it may be an understatement to say that our ability to adapt was tested significantly in 2020, but once again we rose to the occasion, forging a 'new normal' out of the circumstances thrust upon us. It wasn't always easy, as vicar Simon Beach learned when he accidentally lit his robe on fire while conducting an online mass for his parishioners. However, our footing was soon found in the form of attractions like drive-in haunted houses and scream-free roller coaster rides. Should someone feel the need to unleash their frustration in the form of a plaintive wail, there was also a solution for that as an Icelandic tourist campaign encouraged people to record those screams and send them to the country for broadcasting in their picturesque national parks.

Given the seemingly all-encompassing nature of the pandemic it should come as no surprise that there was a discernible increase in people experiencing eerie dreams and unnerving nightmares. Intriguingly, it also led to an uptick in reports of ghosts and hauntings, likely due to lockdowns keeping people confined to their homes where paranormal activity might have previously gone unnoticed. Unsurprisingly, potential signs from the heavens also took on special significance amidst the pandemic as happened in Colombia when someone spotted a tree resembling Jesus Christ and in Uganda where an alleged encounter with a Virgin Mary apparition drew crowds.

As this year we may wish to forget draws to a close, hope springs eternal that vaccines and advanced medical treatments may vanquish the virus which has upended our planet and, in time, we'll return to some semblance of normalcy resembling the days before the pandemic. Those longing for the light at the end of the tunnel need look no further than the tale of Jesse Katayama, a Japanese tourist who journeyed to Peru in March to see Machu Piccu only to be left stranded in the country for seven months when the site closed down. The young man was ultimately rewarded for his patience when the Peruvian government allowed him to tour the site as the lone visitor granted entrance to the iconic Inca citadel. With that in mind, may the doors to our own respective Machu Piccus finally re-open in 2021.