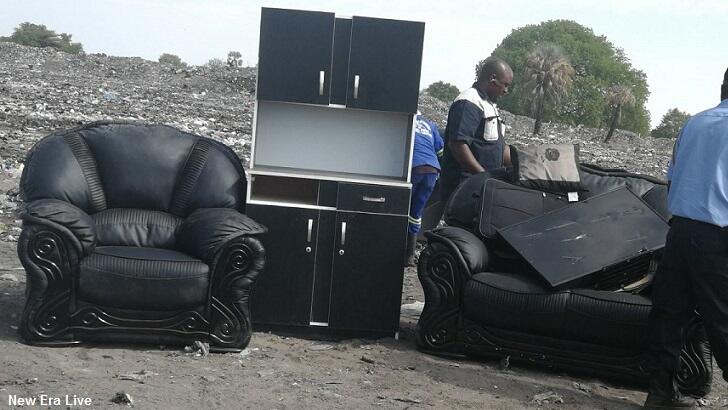 A couple in Namibia stunned a security worker at a landfill over the weekend when they dropped off several pieces of perfectly good furniture from their home because they believe the items are possessed. The bizarre scene reportedly unfolded at a dump in the town of Ongwediva on Sunday evening when an unnamed man and his wife arrived at the site and began unloading a jaw-dropping array of objects from their home. Included among the ditched possessions were a pair of sofas, a television, a kitchen cabinet, some bed sheets, and even cooking utensils.

Bewildered by what he was seeing, the security guard became even more astonished when he learned the couple's reason for getting rid of the items. The man explained that they had removed every piece of black furniture from their home because the objects were "demonic" and that "God revealed to me in my dream that I should throw them away." His wife echoed her husband's sentiments, lamenting that her attempts to sleep on the two-year-old sofa were consistently plagued by evil visions.

The couple went so far as to smash the TV and were even about to set the entire collection on fire when police arrived to investigate the weird commotion. While one might suspect that the pair were being hoodwinked by a ne'er-do-well claiming to have some kind of 'spiritual power,' they were emphatic that the decision to dump all of their black furniture was their own. Be that as it may, authorities confiscated the items and brought them to the police station for safekeeping in case the couple has a change of heart.

Although the chief of police noted that religiously-minded individuals are free to throw away their property for fear that it is possessed, she did express concern that "before you know it, it will be people that they will be getting rid of, and claiming they have demons." Hopefully, for everyone involved, the couple at the center of this strange tale do not resort to such drastic measures. That said, one can't help but be a bit worried about such a possibility unfolding since they've quite literally gotten rid of almost everything but the kitchen sink.