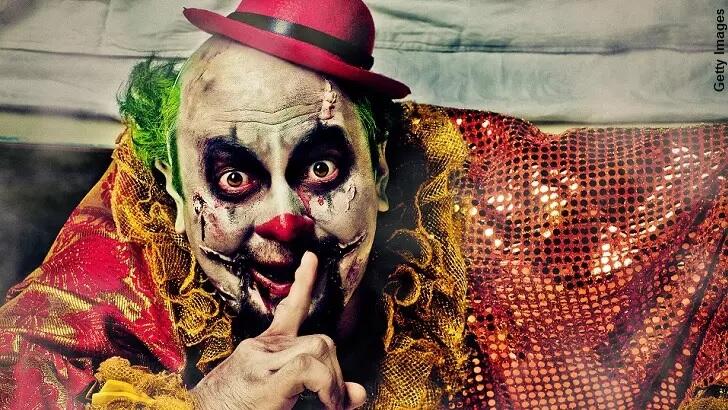 In an indication that creepy clown season may be upon us, residents of a community in England are on edge following a pair of incidents in which people were menaced by a haunting harlequin. The bizarre case reportedly occurred last Thursday in the town of Kingswinford when a couple encountered an individual described as wearing clown face paint and sporting fake 'horror' teeth. They initially assumed that the man was en route to a birthday party or some similar engagement until they got a closer look at him and realized that was almost certainly not the case.

According to one of the witnesses, the off-putting stranger was shirtless and "he was laughing like a clown and had knife scars on his belly." After asking the couple if he knew them and being told that they did not, the haunting harlequin departed the scene in his car. "It was a scary experience for both of us," the man who met the clown recalled, "I went out last night and spent half the time looking over my shoulder."

Chillingly, the couple were not the only people to run into the individual as a paperboy out on his route that same day had his own frightening run-in with what one assumes was the same clown. In this instance, the youngster was so shaken by seeing the out-of-place harlequin that he fled to a nearby park and phoned his mother. "My son was hysterical," she wrote on a community social media page where the sightings have become the talk of the town. "The clown stopped by him again," she recalled, "myself and his dad ran after him, but he had gone by the time we got there."

The matter is now in the hands of local police who say that they have "received calls on Thursday about a man driving in the Kingswinford area either wearing a clown mask or with his face painted and allegedly intimidating pedestrians." Unfortunately, the case poses something of a problem for authorities as there is technically nothing illegal about the man's antics, despite the fact that his appearance and demeanor was unsettling to those who encountered him. Time will tell whether or not the Kingswinford clown was an isolated incident or the first in another series of sightings as we get closer to Halloween.