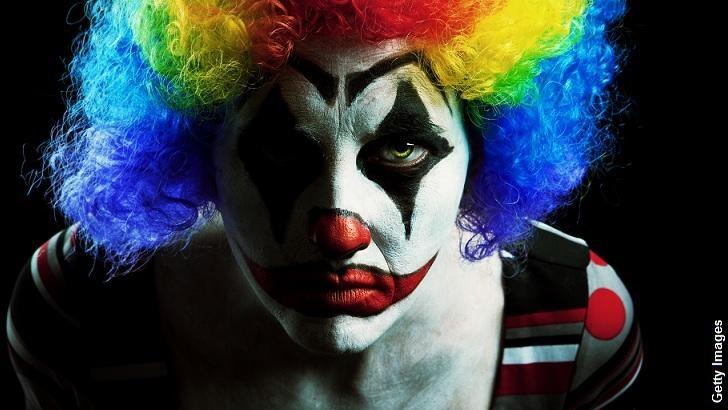 It would appear that this year's creepy clown season has begun as a boy in England says that he was recently threatened at a bus stop by one of the haunting harlequins. The unsettling encounter reportedly occurred in the town of Brentford on Tuesday when an unnamed youngster got off a bus and spotted a man wearing a clown mask watching him. As if that were not unnerving enough, the eerie stranger allegedly shouted "I'm going to get you" at the terrified tot, who fled the scene.

When the boy arrived at school and told his teacher that he'd been chased by a menacing clown, administrators quickly phoned the police. However, as is often the case with such troublemakers, the mysterious stranger was nowhere to be found in the area. Nonetheless, word of the clown apparently got around the community as several schools in the area sent out warnings to parents about the weird situation.

As one can imagine, those receiving the bizarre notice were none too thrilled, with one student's mother declaring that such an episode could be "traumatizing for a child." She went on to lament that the entire affair was "really disturbing" and, turning her attention toward the clown in question, the woman lambasted the individual behind the incident, saying that "the person who's done it is just sick."

Adding salt to the youngster's proverbial psychic wound, authorities seemingly went out their way to debunk the one aspect of his story that allowed him to save some face, so to speak, among his classmates. "It was ascertained that the student was not chased," a spokesperson for the police department needlessly clarified to the public, "but had run off as they were scared due to the fact the man was wearing a mask."