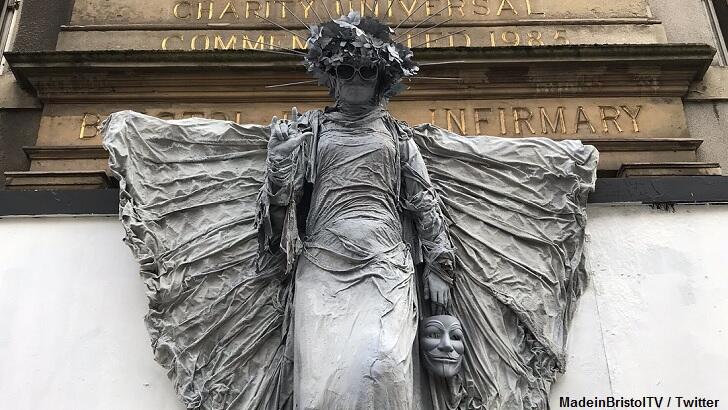 Residents of the English city of Bristol woke up on Tuesday morning to a rather bewildering sight as a bizarre-looking statue was inexplicably on display in front of a disused hospital.

The ornate creation, which somewhat resembles the infamous Mothman, features a woman making an 'I love you sign' with one hand and holding a Guy Falkes mask with the other.

Likened to an angel, due to the woman's wing-like appendages fanning out behind her, the mysterious sculpture left the city scratching its head as to where it came from and what it might mean.

Fortunately, the anonymous artist behind the work eventually provided some insight to the BBC, telling them that the piece is an alternative to angry protests, which he had seen recently in the country.

To that end, he mused that the sculpture could be seen as a more peaceful and productive outlet for society's rising angst over all manner of social issues.

While the artist's intention may be well-meaning, one wonders if the sculpture will wind up becoming something of a self-defeating work should protests erupt when the city eventually decides to remove it.

Have you spotted the #BristolStatue ? It first appeared on Tuesday and people have been speculating what it means ever since. What do you think it represents? pic.twitter.com/HZk4EXA7oz