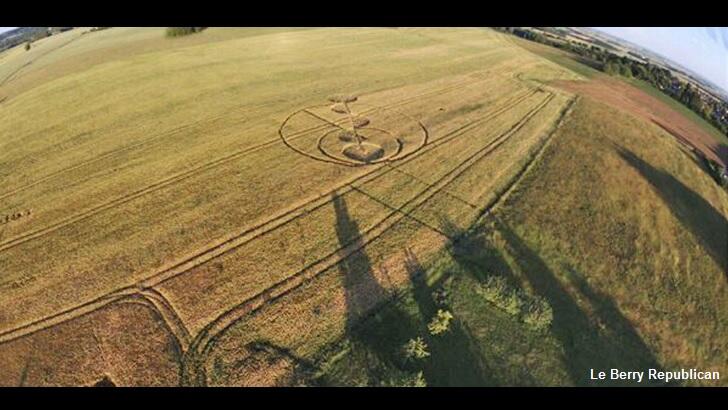 In a rather surprising development, France has come to dominate this year's crop circle season with six formations having now appeared throughout the country over the last few weeks. The flap began at the beginning of the month when pilots from a flying club noticed a curious design in a field. A second formation soon followed and seemingly sparked something of a frenzy in France as, just days later, a jaw-dropping four more designs were discovered.

The first of the newfound formations is located in the community of Menetou-Salon and was spotted on June 14th. The design measures around 130 feet long and consists of a series of circles pressed down into a field. A second formation was reportedly noticed on the same day in the town of Conde-sur-Vire. This find measures 160 feet long and features crescents as well as circles. The third formation, discovered three days later in Saint-Jean-de-Bassel, is dramatically different as it resembles a honeycomb.

The fourth and final formation in the series was found the following day in the town of Blaesheim and boasts a unique backstory, unlike the other designs. While coverage of the other crop circles by French media outlets focused on the mystery of who or what may be behind the curious discoveries, there was no question as to the source for this particular formation. That's because the complex design was revealed to have been the work of a math teacher and his students as part of an elaborate geometry lesson.

According to a local media report, the sizeable formation was approved by the mayor of the town, who arranged for a field to be donated so that the class could have a place to create the crop circle. In total, two busloads of students were enlisted for the project which took a full day to complete. Had the endeavor not been revealed to the public, it's possible that the formation would have set off red flags among crop circle researchers as a number of fastidious students of the phenomenon noted that it appears to be poorly constructed with a number of ragged edges.

Be that as it may, the formation constitutes the sixth crop circle found in France this season. To put that in some perspective, there was only one design discovered in 2018, two in 2017, zero in 2016 and 2017, and two in 2014, meaning that the 2019 count is more than the total number of reports for the last five years combined. And, with summer only having just begun, it's a safe bet that there will be even more entries added to the catalog of French crop circles found this year.

If lockdowns and masks work, why is Covid-19 still spiking? Author Don Jeffries joins Richard Syrett (Twitter) to discuss the economic impact of lockdowns and why he believes it amounts to a massive transfer of wealth from the middle class to the...