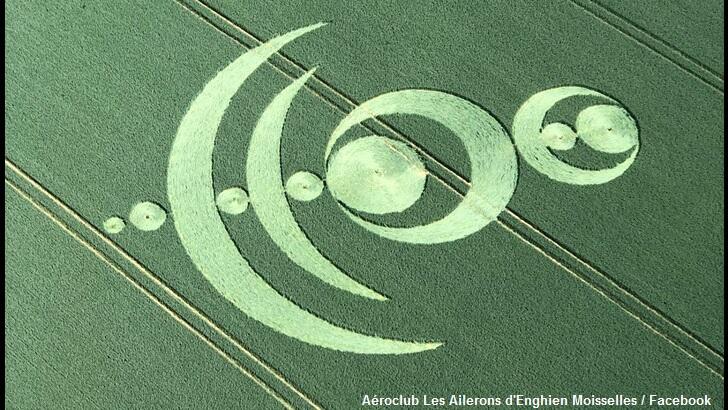 Pilots from a flying club in France were stunned this past weekend when they flew over a wheat field and spotted a fairly elaborate crop formation. The remarkable design was reportedly noticed on Saturday when members of the Aeroclub Les Ailerons d'Enghien Moisselles passed over an area north of Paris. Fortunately, one of the amazed pilots managed to snap a picture of the crop formation and subsequently posted it to the club's Facebook page, leading to the image going viral.

Located in the community of Moisselles, the formation consists of a series of crescents and circles. As to what it might mean, one theory notes that the design was created near a small church called 'Notre Dame de France' and it appears to be on the same longitude as the Notre Dame Cathedral. As such, some observers have suggested that perhaps the formation is a tribute, of sorts, to the famed site that was struck by devastating fire back in April.

While that likely connection would seemingly suggest that the formation was the work of people rather than aliens, the pilot who originally discovered the design postulated that perhaps this was not the case. Speculating on who could have created the work, he mused that "I do not think they are humans, because crops are lying and not crushed." He also cited the complex nature of the design and how it appeared overnight as an indication that, in his mind, people could not have made the formation.