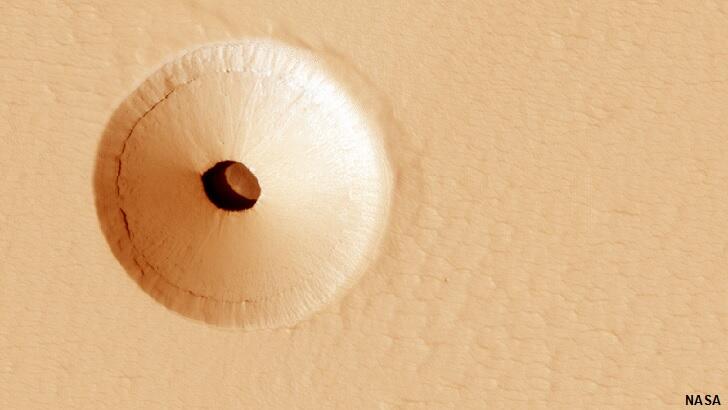 NASA says that an intriguing hole discovered on the surface of Mars is an ideal candidate for a place where life on the Red Planet may exist. The puzzling find was made by the Mars Reconnaissance Orbiter back in 2011 and was showcased by the space agency in a blog post this past Sunday. The opening, which is located on the "dusty slopes" of Mars' massive Pavonis Mons volcano, measures approximately 115 feet in diameter and, based on the shadow cast into the pit, appears to be the opening to a cavern that is around 20 feet deep.

Much like many matters involving Mars, the nature of the hole is something of a mystery as NASA noted that "why there is a circular crater surrounding this hole remains a topic of speculation, as is the full extent of the underlying cavern." Be that as it may, the space agency says that the oddity is of particular interest to scientists because "their interior caves are relatively protected from the harsh surface of Mars, making them relatively good candidates to contain Martian life."

With that in mind, the space agency indicated that "these pits are therefore prime targets for possible future spacecraft, robots, and even human interplanetary explorers." Given the uncertain nature of what's inside the cavern, one hopes that it will first be explored by some kind of autonomous craft before the space agency sends any unwitting astronaut into the hole to investigate it. Should it turn out that there is nothing inside the cave, the site may still prove useful in the future as a shelter.