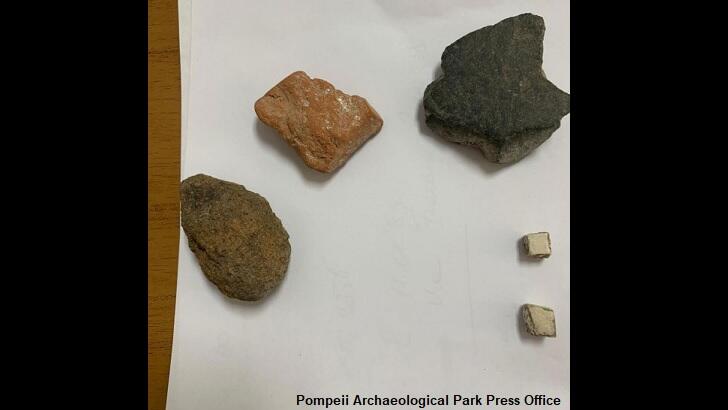 Several objects from the ruins at Pomeii were recently mailed to a travel agency in Italy by a Canadian woman who explained that she had stolen them 15 years ago and now wished to rid herself of what she believes is a curse attached to the artifacts. Among the pilfered items that were reportedly returned by the regretful tourist were a pair of mosaic tiles, two pieces of a vase, and a portion of a wall. Reflecting on her decision to take the artifacts, the woman mused that "I was young and stupid, and I wanted to have a piece of history that nobody had."

However, upon returning home, the woman's luck took a turn for the worse and, over the course of the next 15 years, she had two bouts with cancer and her family suffered serious financial hardship. How and why she ultimately determined that her troubles were related to the stolen Pompeii pieces is uncertain, but the tourist was convinced that the ill-gotten mementos were to blame. "I stole a piece of history that had lots of negative energy inside," she wrote in a letter which was included with the returned objects.

"Please take these artifacts back, so I can do the right thing and mend the mistake I've made," she pleaded, "I don't want to pass this curse on to my family, my children or myself anymore." The stolen pieces have since been handed over to officials at the Archaeological Park of Pompeii where they will likely go on display as part of a showcase of other artifacts which were taken and returned by tourists sharing eerily similar stories of bad luck.

Unsurprisingly, Pompeii is not the only site plagued by sticky-fingered visitors who have taken objects and then later regretted their decision. Back in July, the Colorado Parks and Wildlife department received a package containing a rock which was stolen from one of their parks and was subsequently perceived as cursed by the man who had been given the sizeable stone by a friend. And, in March, an Israeli man with fears that the apocalypse was near sought to absolve himself ahead of time by returning a relic which he had pocketed from a National Park.