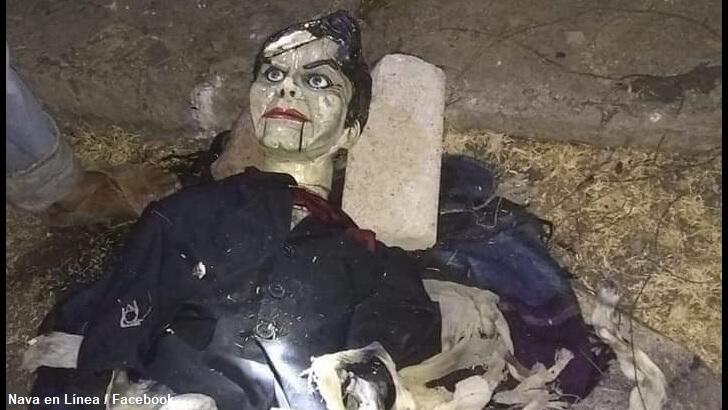 Residents of a town in Mexico were left unsettled when a creepy-looking doll suspected of being cursed was pulled from a river. The eerie object was reportedly found last month in the community of San Antonio La Esperanza. Since it had been tightly wrapped in a blanket that was secured with a rope, the life-size doll was initially suspected to be a dead body. When it was subsequently unwrapped, however, the true nature of the object was revealed.

Staring back at the aghast individuals who found the oddity was the spooky face of a figurine. Although some media reports have described the doll as a ventriloquist dummy, its size and construction, which included a base at its feet, suggest that the object was actually more along the lines of a cigar store Indian. Be that as it may, residents were understandably unnerved by the presence of the doll in their community, especially since the way it had been found suggested that there was some kind of sinister energy attached to it.

As such, they quickly set about lighting the figurine on fire in the hopes of destroying it. Alas, due to the dampness of the object as well as the materials used to construct it, the blaze only managed to make the doll look ever more nightmarish. Pictures and video of the weird incident wound up online and the story went viral on Mexican social media, even garnering the attention of Oscar-winning director Guillermo del Toro, who shared the images with his followers on Twitter.