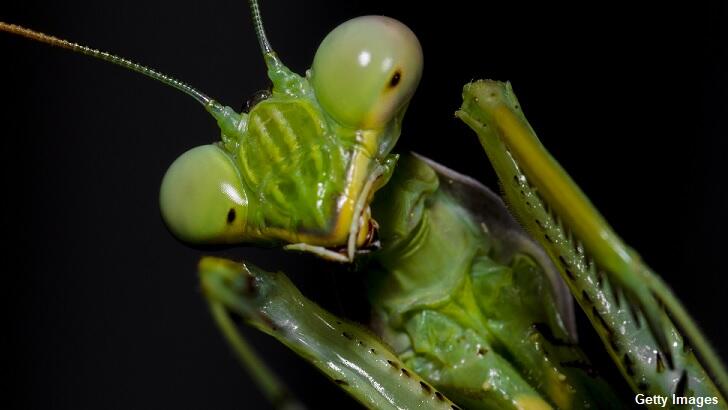 A young man in England claims that he had a terrifying encounter with an extraterrestrial that resembled a giant praying mantis which could communicate with him telepathically. The bizarre incident reportedly occurred this past summer, but only recently came to light when the shaken witness, Paul Froggatt, decided to share his story with the media. According to him, the unsettling event unfolded one morning last July as he was riding his bicycle home from his job at a dog food factory in the town of Warwick. The routine trip took a troubling turn, he recalled, when he first spotted a UFO hovering in the sky.

"At first I thought it must be Venus or a satellite," he said, "but it seemed to be much closer than either of these things" and, after Froggatt had taken some pictures of the anomaly, he noticed that it began rotating. Uneasy about what he was witnessing, the young man fled the scene on his bike and ultimately wound up in a wooded area where he could no longer see the odd object. Thinking that the weirdness was behind him, Froggatt was soon disabused of that notion when he turned a corner and spotted "what I can only describe as a humanoid praying mantis."

The young man described the curious creature as standing at least seven feet tall and possessing a "triangular head and big oval black eyes. It had all the features of a mantis but stood on two legs and had a somehow human-like shape about it." Gobsmacked by the insect-like entity, Froggatt simply stared into its eyes and felt as if he and the oddity were somehow communicating telepathically. "My fear was replaced with completely alien thoughts of utter hatred and evil I felt projected from this thing," he said, recounting the chilling messages.

Eventually, Froggatt was able to break free from the mental grip of the creature and escaped from the scene unscathed. Unfortunately for the young man, his life has been torn asunder since the encounter with the presumed extraterrestrial. In addition to having difficulties sleeping at night, Froggatt was forced to quit his job after he shared his story with co-workers and quickly became the laughingstock of the dog food factory. Be that as it may, he insists that the incident truly took place and now hopes that someone can come forward to somehow confirm, at the very least, that there was a UFO in the sky that fateful morning.