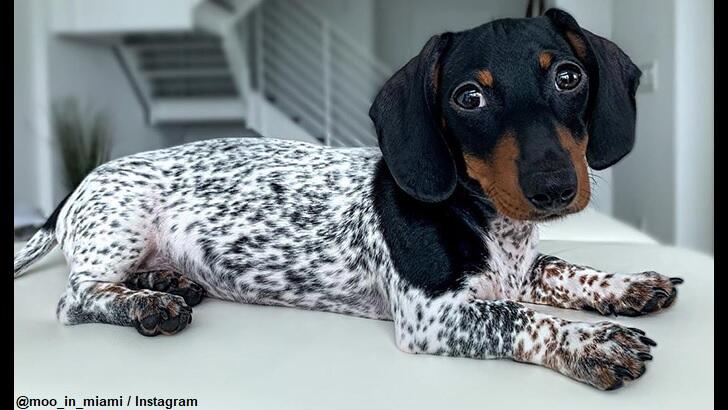 A dog in Florida has become a viral sensation thanks to its jaw-dropping fur pattern which makes it looks like he possesses the head of a dachshund and the body of a dalmatian. The wild-looking canine reportedly belongs to Miami resident Victoria Hoffman, who says that the adorable animal's appearance frequently stops onlookers in their tracks when she takes him out for a walk. According to his proud owner, who dubbed the dog 'Moo' in honor of his cow-like look, people often suspect that the canine is wearing some kind of coat until she explains that his piebald fur is merely a wondrous quirk of nature.

"Moo doesn't just have a special coat, but a special personality as well," she gushed, "he has lots of attitude and is super cuddly and sweet as well." In a testament to how every dark cloud has a silver lining, Hoffman explained that she had always wanted a dachshund but wasn't able to get one until a few months ago when the coronavirus pandemic left her with enough downtime to devote to a new puppy. "It's true that blessings and joy can still come out of hard times," she mused about the unlikely turn of events. As one might imagine, Moo has become something of a star online, where cute animals are king and an Instagram account showcasing the dog in all his spotted glory has already amassed thousands of followers in just a few short weeks.