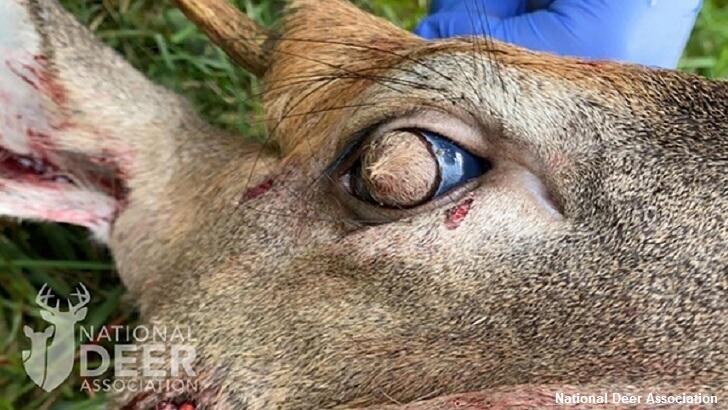 In a bizarre animal case out of Tennessee, wildlife officials recovered the remains of a deer that was stricken with a rare condition that caused its eyeballs to be hairy! The unfortunate creature was reportedly spotted last August in the community of Farragut, where it caught the attention of concerned residents because it was seen wandering around the streets seemingly in a daze. Authorities responding to the report promptly euthanized the animal and, bewildered by its weird eyes, sent the deer to the Tennessee Wildlife Resources Agency for examination.

The carcass of the creature was subsequently examined by specialists at the Southeastern Cooperative Wildlife Disease Study program at the University of Georgia. Experts there determined that the deer had a condition known as corneal dermoids, which occurs when a skin-like tissue grows over the eyes and, in some instances such as this particular case, the filmy substance can sprout hair. Upon removing the furry disc, the scientists found that the animal, which was approximately one-and-a-half years old, had a perfectly normal eyeball beneath it.

Dr. Nicole Nemeth, who spearheaded the study of the animal, theorized that it was likely born with the condition and that the hairy tissue gradually grew over its eyes as it got older. "The deer was able to adapt to its decreasing field of vision over time," she said, postulating that by the time it met its demise, the animal "maybe could tell day from dark, but I wouldn't think it would be able to see where it was going." How the deer managed so survive so long with the condition is something of a mystery, though it is suspected that its mother likely protected it throughout its youth.