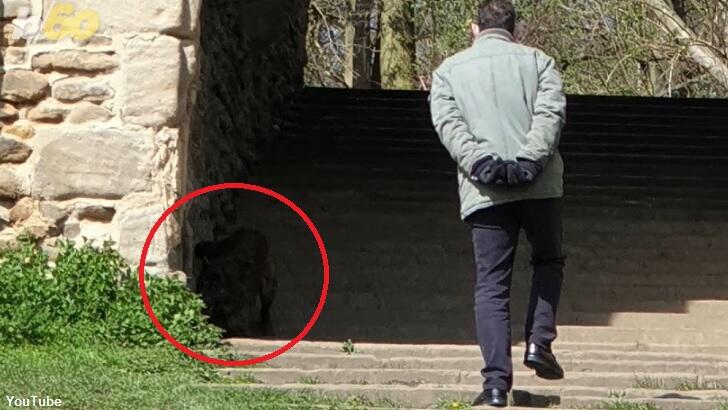 A woman in England suspects that she may have snapped an image of a 'demon dog' seemingly ready to pounce on an unsuspecting bystander. The eerie photograph was reportedly taken by Stephanie Smith while visiting Roundhay Park in the city of Leeds. Specifically, she was admiring a decorative castle built at the site in 1811 and long-rumored to be home to a variety of spirits. One such phenomenon believed to lurk at the park, as well as a number of other similar locations in England, are demonic dogs known as 'gytrash.'

With that in mind, one can understand why Smith was gobsmacked when she later looked at her photos from the trip and spotted something peculiar lurking on some steps. "I froze when I realized the shadow was some sort of animal," she recalled, "it took me a moment to figure out what it was but once I could see the head, ears, tail, and legs, there was no mistaking it was a demon dog." Smith noted that the image was particularly unnerving because it appeared as if the ghostly creature was lurking in the shadows and possibly eyeing some prey.

As if often the case with these types of images, Smith insists that there was no person nor animal in the area at the time that the photo was taken that could account for the weird anomaly. As such, she expressed a remarkable degree of certainty about what she photographed, declaring "it’s a gytrash, a black wolf demonic dog stalking the castle and the grounds of Roundhay Park." Be that as it may, skeptical observers are apt to suggest that the 'sinister canine' is merely a trick of light and shadow coupled with local lore. What's your take on the possible demon dog? Let us know at the Coast to Coast AM Facebook page.