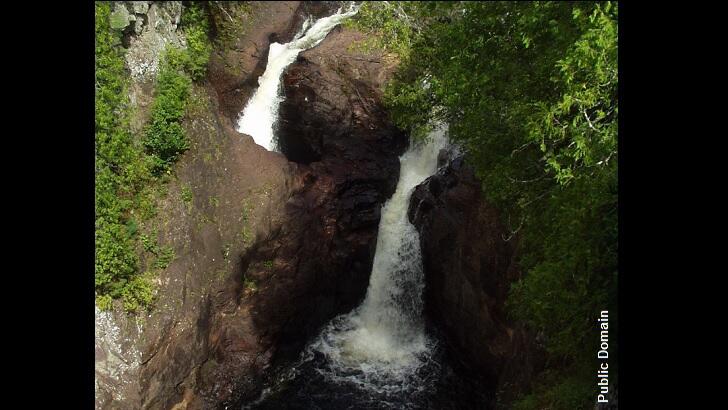 'Devil's Kettle' Mystery May Be Solved

A puzzling natural landmark that has vexed Minnesotans for generations may have finally given up its secret as researchers believe they have solved the mystery of the Devil's Kettle.

Located in a state park, the strange site sports a unique feature where the Brule River splits into two streams with one becoming a waterfall while the other pours into a hole and vanishes.

Over the years, curious visitors and bonafide academics have attempted to discern where the disappearing water goes by using objects as simple as ping pong balls and as advanced as GPS devices.

All failed to emerge from the Devil's Kettle, baffling scientists and bolstering its spooky status among local residents who gave rise to an urban legend about someone pushing their cars into the hole to try and solve the mystery.

However, a 'mapping hydrologist' with the Minnesota Department of Natural Resources devised a new method to track the water and says that he now knows where the Devil's Kettle leads.

The water which flows into the hole, Jeff Green explained, simply rejoins the other half of the river at some point shortly after the dramatic split.

By measuring the flow of the river before it broke in half and then measuring it a distance from the waterfall, Green was able to determine that the numbers were nearly identical.

The findings indicate that the water that 'vanished' in the Devil's Kettle was somehow reconnecting with the river rather than splitting off into a mysterious underworld.

As to why all the various objects tossed into the Kettle never emerged, Green theorized that they were disintegrated by intense water pressure found at the bottom of the hole.

His hypothesis will be put to the test later this year using a special dye which should shed further light on the enigmatic location.

Should Green be proven correct, he will likely be lauded for solving the legendary mystery. Let's just hope he didn't have to make a deal with the devil to get the answer.