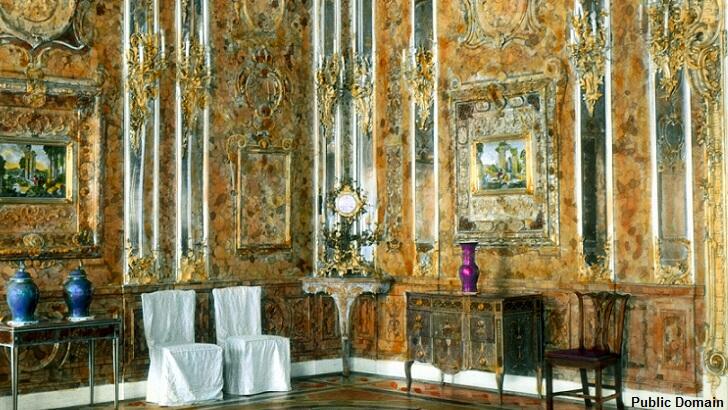 Nearly a year after it was discovered off the coast of Poland, a sunken Nazi steamer ship is being searched by a team of divers in the hopes that it might contain the legendary lost Amber Room. The discovery of the downed vessel, known as Karlsruhe, last autumn sparked considerable speculation that the wreckage could be the final resting place of the ornate set of gold and amber panels that was pilfered from a Russian palace by the Nazis during WWII and subsequently vanished during the chaos of the final days of the war. The reasoning put forward by researchers is that the steamer ship departed from the city of Konigsberg, which was the last known whereabouts of the stolen Amber Room.

Hopes that the location of the lost riches might have finally been found were raised even further this past December when an initial dive at the wreckage revealed that the ship contained specially-designed crates with rubber seals that were seemingly intended to protect precious cargo. After a planned expedition to the Karlsruhe apparently fell through in May, the mission finally got underway earlier this week. Spearheaded by the organization Baltictech, the exhaustive search will reportedly feature twelve dives per day wherein three people will enter the downed vessel and spend about a half-hour investigating the mysterious boxes contained in the wreckage.

While finding the Amber Room would be a fantastic development considering that it has eluded countless researchers for decades, expedition leader Tomek Stachura seemed to do his best to temper expectations, musing that there is likely only "a one to two percent chance that the room is actually in the numerous locked boxes that we saw during the last dive with robots." However, a historian who has studied the case of the Karlsruhe observed that the crates seen in the initial examination of the wreckage appeared to have come from museums, so the ship may contain some pilfered riches beyond the Amber Room specifically.

In an update on their Facebook page on Tuesday, Baltictech indicated that they have completed the basic infrastructure work needed for the dives to begin in earnest and expressed optimism about the expedition as a whole. "Everything works perfectly and the weather is like a dream," they wrote, "and it's supposed to be like that for another week." The group went on to say that they intend to start "focusing on the cargo bay" on Wednesday to "see if we can find anything new." Should Baltictech defy the odds and find the Amber Room, there would still be something of a wait before it is brought up to the surface as the project is aimed at producing an inventory of the cargo and any actual recovery of the treasure would fall upon the Polish government.