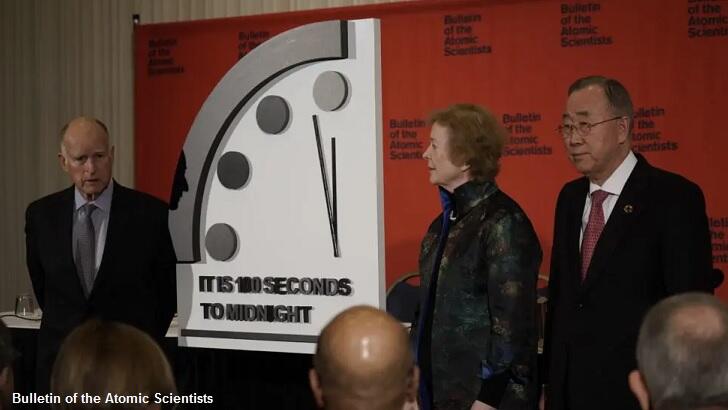 Doomsday Clock Gets Historic and Unsettling Update for 2020

The almost-always worrisome annual assessment of where humanity stands when it comes to total annihilation by our own hand took on an even more unsettling tenor this year as the 2020 update to the Doomsday Clock sees us now sitting at 100 seconds to midnight. The symbolic measurement was developed by the Bulletin of the Atomic Scientists back in 1947 and, every January, the group reveals their evaluation of how close civilization is to a proverbial doomsday scenario.

This year's update to the Doomsday Clock was both historic and rather chilling as the organization believes we are now closer to annihilation than at any point in the history of the measurement. To put this in perspective, Rachel Bronson, president of the Bulletin of the Atomic Scientists, said in a press release that "we are now expressing how close the world is to catastrophe in seconds – not hours, or even minutes." She went on to declare that "we now face a true emergency – an absolutely unacceptable state of world affairs that has eliminated any margin for error or further delay."

The group pointed to three key factors that informed their decision, beginning with what they see as worsening oversight when it comes to nuclear weapons where disarmament seems to have largely ceased and more troublesome nations are closer to getting their hands on such device. They also pointed to the continued "limited political response" to climate change which "falls far short of meeting the challenge at hand." Finally, the organization expressed concern about "corruption of the information ecosphere" by way of online disinformation campaigns and cyber warfare.

Hoping to pull humanity back from the brink, the Bulletin of the Atomic Scientists offered some possible solutions to these tremendous challenges facing our society. The suggested that the United States and Russia join together in a sweeping resolution aimed at reducing nuclear weapons, curbing cyberwar, and addressing the militarization of space. Additionally, they called for all countries to join together and "publicly rededicate themselves to the temperature goal of the Paris climate agreement."

In addition to that, they argued for the international development of "norms of behavior" which would "discourage and penalize the misuse of science." To that end, the organization also proposed greater policing of disinformation spread online as it threatens to not only undermine trust in the government and the media, but "the existence of objective reality itself." Finally, they proposed a renewed focus on finding a nuclear deal with Iran that can satisfy all nations and prevent the country from obtaining nuclear weapons.