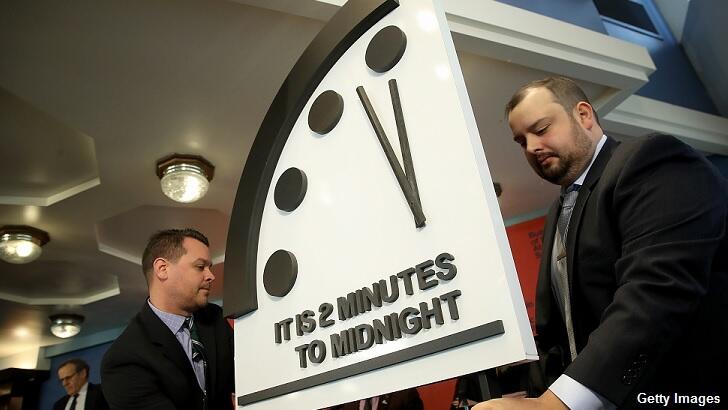 The annual assessment of how close humanity might be to destroying itself, known as the 'Doomsday Clock,' was announced today and the prognosis is worrisome to say the least.

The 2018 edition of the ominous barometer, which is maintained by the Bulletin of the Atomic Scientists, stands at an unsettling two minutes to midnight.

This is the closest the clock has been to the unnerving zero hour in an astounding 65 years when it also read 11:58:00 during the height of the Cold War.

Among the major reasons for the change this year were the advancement of North Korea's nuclear weapons development as well as the further strengthening of already-dangerous nuclear arsenals in other countries.

In addition to those factors, the continued impact of climate change on the planet was also noted as a key issue which stands poised to create a myriad of problems in the future.

At a press conference announcing the change, BAS member, theoretical physicist, and former C2C guest Lawrence Krauss expounded further on issues which go beyond the 'big' dangers that influence the clock.

"There’s been a loss of trust in political institutions, in the media, in science, and in facts themselves," he mused, "all of which exacerbate the difficulty in dealing with the real problems the world faces."

Considering that the perilous state of the world and that these social forces will likely become further entrenched, humanity may stand on the precipice of making some truly unwanted history next year if the clock moves past two minutes to midnight for the first time ever.

While we wait to see if that happens, Coast Insiders can check out Lawrence Krauss' appearance on the 6/20/2017 edition of C2C.