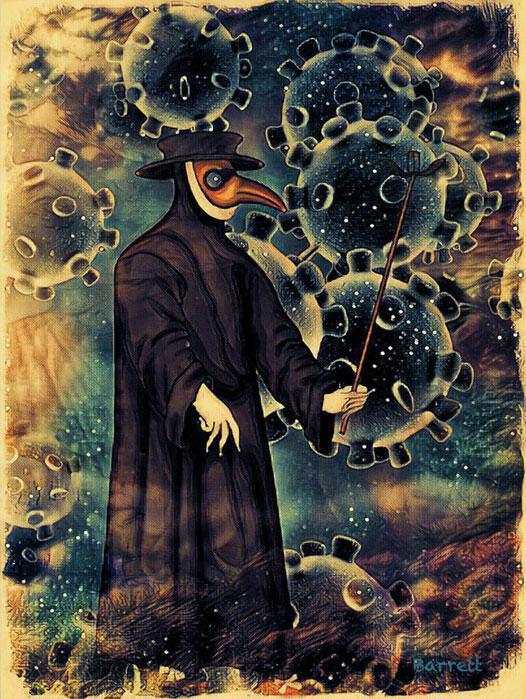 Dreams & Nightmares in the Age of Coronavirus

Last night, I saw a naked figure prowling in my backyard. Peering through the French doors, I thought it might be a disoriented neighbor and cracked the door a bit. The bald figure bounded for the door, and I could see from a closer view “they” had no genitalia. I flipped the lock back, but they began to dismantle it with a desperate efficiency, and in no time, pulled out the entire mechanism. They were getting in.

It was only a dream. But a dream in the age of coronavirus, where our nighttime journeys are now viewed through the dark lens of the pandemic. Where will our dreamscape take us now that our waking life has become a nightmare? To a comforting time before the outbreak — a realm oblivious of the spreading virus? Or to a white-knuckle theater of our fears aligned to the new reality, and spinning out into surreal terror?

I recently surveyed the Coast audience, asking them to share their dreams and nightmares during these tumultuous times. In just under ten days, I detected movement from symbolic accounts to more realistic and medically oriented stories, perhaps reflecting our entrenchment in the COVID-19 miasma.

One of the first respondents, Asher G., wrote on March 30th, 2020: "I was visiting with a friend in my backyard. We were sitting next to the fire pit and she said to me, “do you see that thing attached to you?” I looked down and coming from my stomach was a misty, grey entity, about the size of a toddler. I freaked out. My friend told me that this isn’t going to work out and she left. The entity became invisible but I knew it was there.

I went inside my house, which was exactly like my real house, and I could feel its presence following me up the stairs to my bed. I lay down in fear and pulled the covers up. At this point I awoke crying and was so scared I had to wake my wife. I turned all the lights on and told her my dream. The creepiest part is that it felt like I was actually walking around my house. In the morning, I smudged every room."

We don’t need to drag out our dream dictionaries to decipher that in the context of the pandemic, his entity could represent the virus, just as my bald, sexless “neighbor.” Although everyone’s dream symbols carry their own interpretations, as our shared reality is subsumed in confinement, isolation, and illness, our dreams and their possible meanings may become more closely aligned with each other.

This dream came from a 72-year-old male nurse named Bob R., who due to age and medical conditions, has been in quarantine and unable to assist in clinical care. He wrote on April 6th:

"I was back in my ER in Ohio — same setting and same co-workers that I recognized vividly. None of us were wearing masks! We were in Trauma Room 1 and they wheeled in an adult male DOA covered with an old blanket. We were discussing transferring him to a morgue cart rather than contaminating our ER bed when I noticed his western boots. I commented — those are some very nice boots. I have a pair just like them. I walked to the head, pulled back the blanket and it was ME on the gurney. I woke up."

Dream interpreters have often cited how death represents change or transformation, but with COVID-19 in the air, one wonders if Bob’s symbology was chipped bare. At least he died with his boots on. And we can’t deny that sleep itself has a whiff of death about it, as we fall into private realms cordoned off from sensory data — in the bloodlines of Greek mythology, Thanatos (Death) is the twin brother of Hypnos (Sleep).

A medical setting was also featured in a report from “Dr. Chris” on April 5th: "I was taken to a facility where I was stretched out on a table. Hands and feet tied down. I was wearing only boxer shorts… The table then lifted me into a vertical position and proceeded to move me forward into what appeared to be a mold of a human body. I heard what seemed like doctors or medical staff talking to each other on the other side of the wall/mold about how they didn’t know how to test people and were referring to a diagram map. That if they inserted a needle-like microscope into the flesh, they should see blue if the person was positive.

I remember getting stuck in the right arm biceps, into both leg shins, and finally one person mentioned to take a core sample by removing a chunk space of my center, thus exposing my heart and vital organs. They then put the needle inside my core and I woke up immediately thinking it was really happening. I knocked over my bed lamp during the process…"

The purpose of dreams has long been debated, but a recent theory poses that they can serve as a kind of threat rehearsal, where the mind war games different simulations as a way to prepare. Cold comfort, perhaps, that some of our harrowing nightmares are endowed with a function beyond just scaring the bejesus out of us.

Pictured: "I Can’t Wake Up” digital painting by Deirdre Barrett