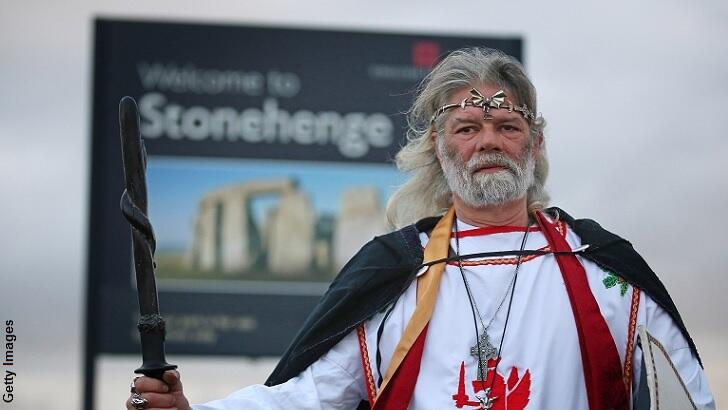 A man claiming to be the reincarnation of King Arthur has filed a lawsuit in England over what he sees as discriminatory parking charges at the famed Stonehenge monument.

The parking fee has been a source of considerable controversy since it was enacted for this past summer's solstice, causing raucous protests and being blamed for a downturn in attendance at June's festivities.

And now it just may be heading to court as self-proclaimed 'Druid king of England,' Arthur Pendragon says that the new rule which triples the price for parking only for the day of the solstice amounts to a 'pay to pray' scenario.

"You wouldn't charge people to go to a church, mosque or synagogue, and if you did there would be a riot," he told the Plymouth Herald, "they are doing this because we are a minority religion."

A fixture at the site for years, Pendragon was actually banned from Stonehenge after he refused to pay the newly instituted parking fee back in June.

As such, he's decided to sue various municipalities in an attempt to rescind the increased parking fee and, ostensibly, be allowed back to the legendary location.

English Heritage, the organization tasked with maintaining Stonehenge, say that the parking increase was due to additional costs incurred by revelers at the site's annual solstice events.

However, Pendragon suspects that the 'solstice fee' is really just a way to reap a profit from the huge influx of tourists that come to the Stonehenge for the events.

The lawsuit is the latest legal salvo in Pendragon's long running battle with the caretakers of Stonehenge over the site's responsibility to allow Druids to worship at the monument.

Pendragon previously bested the overseers of Stonehenge in the European Court of Human Rights over access to the site for Druid ceremonies.

Whether the showdown over the new parking fee falls in his favor as the previous case did remains to be seen, but we suspect that it will not be Pendragon's last battle for Stonehenge.