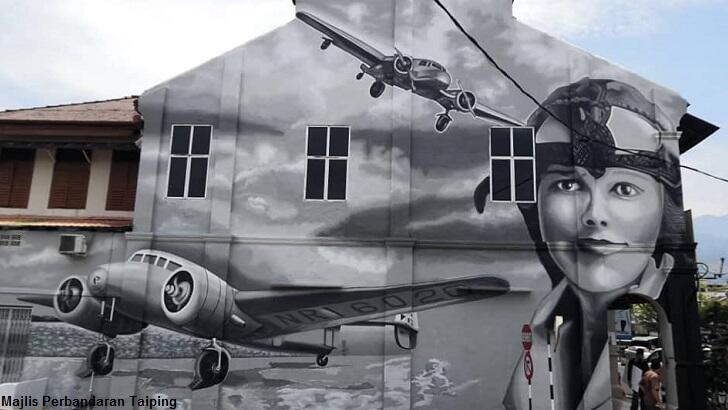 Earhart Mural in Malaysia Gets Panned

A massive Amelia Earhart mural that was recently unveiled in a Malaysian city is being panned by residents who are wondering why it was created in the first place. The artwork, which measures a whopping 88 feet by 12 feet, was reportedly revealed to the public for the first time last week as part of an independence day celebration in the city of Taiping. Although the piece is undoubtedly impressive in its size and artistry, its subject matter has created considerable controversy in the community.

The issue being raised by a number of residents is that Earhart's connection to Taiping is fairly tenuous. During her now-infamous 1937 attempt at circumnavigating the globe which ultimately led to her disappearance, the legendary pilot stopped at the city's airport for a day to refuel her plane. Much to the chagrin of those in Taiping who don't consider the event to be all that significant, the brief moment when Earhart came to town is what is being memorialized in the mural.

In a testament to the expression 'everyone's a critic,' the Facebook page for the Taiping Municipal Council, which oversaw the creation of the mural, was soon filled with comments from residents who were unhappy about the artwork. "Don't tell me just because she refilled her petrol here it became a historical matter," groused one individual, while another echoed that sentiment by saying "the history is not wrong. It is just not relevant to the context of Malaysia’s independence."

Others pointed out that many modern-day residents of the city are largely unaware that Earhart even visited Taiping and so they are particularly perplexed by the mural. Amazingly, the furor surrounding the painting was apparently significant enough that officials in the city plan to hold a press conference to, presumably, put a positive spin on the piece. Oddly enough, the mural in Taiping is not the only Earhart tribute to become a community concern as debate continues to rage in Saipan over plans to build a huge statue of the aviator whose only connection to the area are rumors that she ultimately landed there.