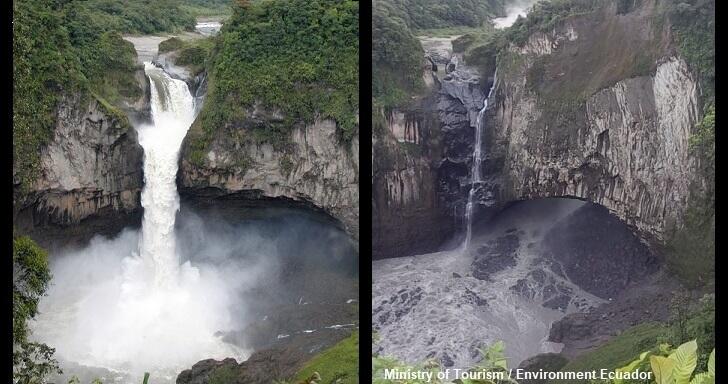 An enormous waterfall in Ecuador has disappeared due to a sinkhole that disrupted the flow of the river feeding into the iconic location. Known as the San Rafael Waterfall, the breathtaking site, which is the tallest of its kind in the country at around 500 feet, had been a popular tourist attraction, drawing tens of thousands of visitors each year. However, much to the consternation of environmental and tourism officials, it was reportedly noticed at the start of February that the waterfall had inexplicably stopped flowing.

Since that time, experts in Ecuador have attempted to solve the mystery of what caused the picturesque site to suddenly vanish. An initial investigation indicated that a sinkhole, which formed a few miles upstream, is to blame for the river being diverted and ultimately splitting into three new waterfalls. While one might think this was a wholly natural event, there is considerable speculation that a recently-constructed hydroelectric plant could be to blame.

"A waterfall that has been there for thousands of years does not collapse, coincidentally, a few years after opening a hydroelectric project," declared scientist Emilio Cobo. He posits that the arrival of the plant could have led to less sediment being picked up by the river. This causes a phenomenon called 'hungry water' in which previously undisturbed sand and rocks are absorbed by the flow, creating a proverbial butterfly effect in which the sinkhole was then formed and the waterfall diverted.

That said, not everyone is convinced that the hydroelectric plant is to blame for the creation of the sinkhole and some scientists have suggested that it was simply the result of volcanic activity, which is known to occur in that region of the country. As such, it is expected that scientists and experts in Ecuador will be conducting an extensive study into the strange manner with the hopes of ultimately solving the mystery of what, exactly, caused the demise of their beloved waterfall.