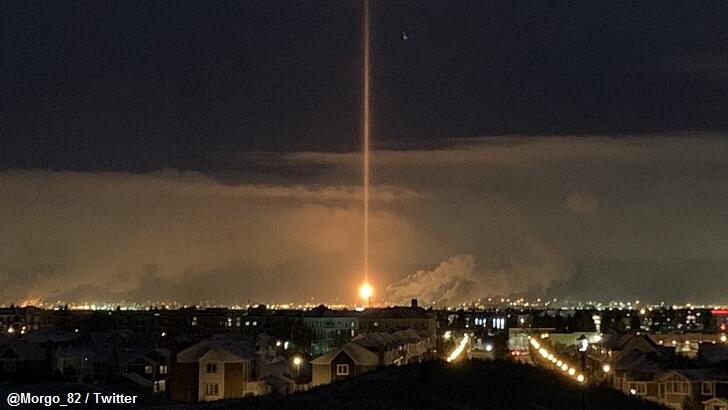 Residents of the Canadian city of Edmonton were bewildered on Tuesday evening when an eerie beam of light appeared in the sky and sparked some truly fantastic theories for what had created it. The wondrous sight was reportedly first spotted at around seven o'clock at night and remained visible for hours. As is often the case with such events, numerous puzzled observers posted photos of the odd illumination on social media and speculated about what it might have been.

It would seem that the two most popular possibilities offered by amused witnesses were that the beam was an indication that aliens had arrived or, failing that, the illumination was demonic in nature. More serious-minded individuals raised concerns that the strange light was coming from a disaster of some kind and proceeded to flood the phone lines of the fire department, who eventually took to Twitter to offer an explanation for what people were seeing in the sky. Fortunately, it turned out that the beam of light was neither alien nor demonic and had a much less sinister origin.

According to the Edmonton Fire Rescue Services department, the beam of light was coming from a nearby refinery which was burning excess and unusable gasses in a process known as 'flaring.' They went on to thank residents for reporting the seemingly strange event and assured them that "this is not a fire event." And for those in Edmonton who may have missed all the commotion, the department said that the flaring will continue for the next two days, so they may get a chance to catch a glimpse of the 'alien' beam tonight.