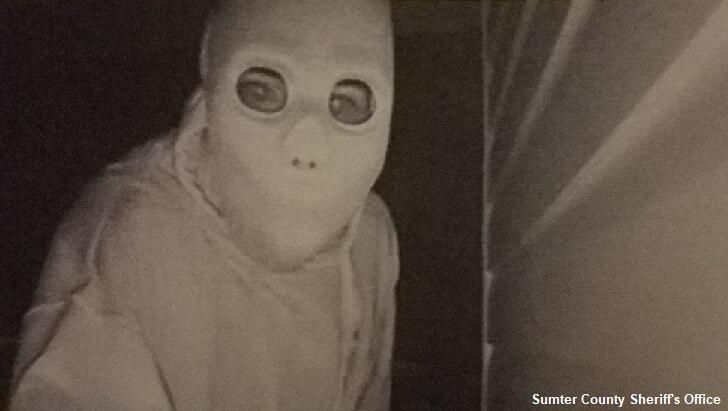 Residents of a neighborhood in South Carolina are understandably on edge after authorities alerted them to an eerie-looking masked man spotted roaming around their community. An image of the mysterious stranger was reportedly captured by the security system of a home in the city of Sumter late last month. According to the Sumter County Sheriff's Office, the creepy individual "scared the residents in the house" before presumably vanishing into the night. The department subsequently shared the photo on their Facebook page and asked residents of the city for any help in identifying the masked man.

As of now, it would appear that person has not done anything illegal, though the sheriff's office indicated that they were investigating the matter, which they described as "suspicious activity." As one might imagine, based on the nightmare-inducing image, the Facebook post sparked considerable feedback. Many people likening the person to the infamous 'Slender Man,' while others suggested that perhaps it was just someone trying to pull off an ill-advised practical joke. To that end, more than a few people on social media mused that, regardless of the person's purpose, their unnerving garb is not a particularly wise choice, since a surprise appearance by the masked man may wind up turning tragic should they encounter the wrong individual.