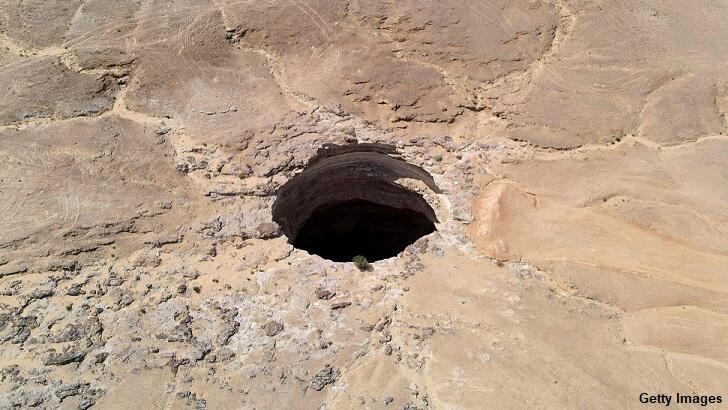 A curious and rather eerie chasm, dubbed the 'Well from Hell,' continues to baffle authorities in Yemen despite being in existence for centuries. The peculiar pit, which is located in the country's Al-Mahra near the border with Oman, reportedly measures nearly 98 feet in diameter, however its depth is actually a mystery. "We've never reached the bottom of this well," explained Salah Babhair, an official with Al-Mahra's geological survey and mineral resources authority, "as there's little oxygen and no ventilation." As such, experts can only guess how deep the hole might be with estimates ranging from around 300 feet up to approximately 800 feet.

According to Babhair, the hole has been in the desert for "millions and millions" of years and, as one might imagine, some rather unsettling legends have become attached to it over that time. Due to an unpleasant odor emanating from the pit, it has come to be regarded by people living in the area as a prison for demons, specifically the infamous jinn. There are also claims that those who venture too close to the pit can wind up being pulled into it, presumably never to be seen again. Remarkably, belief in the ominous nature of the chasm is so significant that many local residents not only refuse to go near it, but some will not even talk about it out of fear of unleashing the dark forces believed to live within the pit.

Detailing one expedition to the hole in an attempt to learn more about it, Babhair indicated that officials only managed to get around 175 feet down into the pit before abandoning the operation. "We noticed strange things inside. We also smelled something strange," he recalled, before musing that it's "a mysterious situation." Alas, Babhair did not elaborate on what 'strange things' were seen inside the 'well from hell,' which will likely only fuel the legends of it being the domain of demonic beings. Considering that the chasm has been around longer than anyone can remember, yet it is still quite mysterious, he rightfully observed that "these places require more study, research and investigation." That is, of course, assuming they can find someone brave enough to go down there.