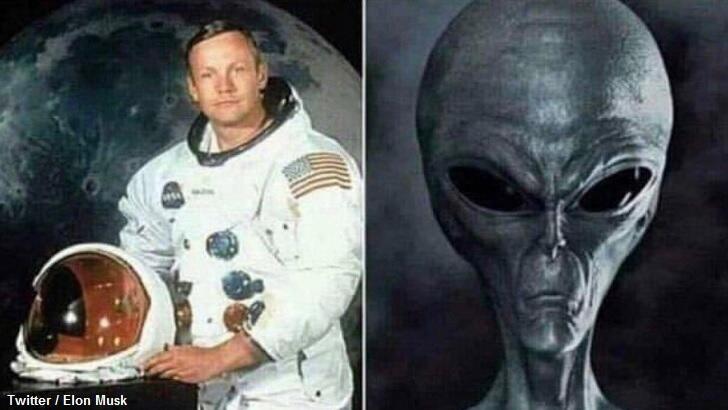 SpaceX CEO Elon Musk caused something of a stir online yesterday when he shared a weird meme which suggested an alien connection to the moon landing. The strange message, issued from his official Twitter account, simply read "there are no coincidences" and featured a picture of Neil Armstrong juxtaposed with a menacing depiction of an iconic alien grey. Written over the two images were the words "Neil Armstrong was the first person to land on the moon. 'Neil A' backwards is 'Alien.'"

As one can imagine, the bizarre tweet caught the attention of the Tesla founder's 23 million Twitter followers who were left wondering what Musk may have been trying to convey via the meme. The message was made even more confounding when he subsequently tweeted "Evian, the first bottled water, is naive spelled backwards." This led some observers to speculate that perhaps Musk was merely poking fun at conspiracy theorists who contend that there is an alien presence on the moon.

However, since the enigmatic entrepreneur failed to provide any clarity on the subject, suspicious minds are free to draw more fantastic conclusions about the message, namely that he was giving a proverbial nod toward the reality of ETs. Considering the groundbreaking work done by SpaceX, UFO enthusiasts would no doubt argue that Musk might very well be among a small handful of people on the planet who genuinely knows the truth about the phenomenon.

To that end, this is actually not the first time that Musk and his private space company have been linked to UFOs. Perhaps the most intriguing incident occurred back in 2016 when conspiracy theorists posited that an unidentified flying object caused the dramatic explosion of a Falcon 9 rocket. The following year, anomaly hunters accused SpaceX of cutting their live feed from a rocket in space after a UFO appeared.

With these events in mind, could Musk's tantalizing tweet have been his way of tipping his hand regarding what he really knows about ETs or was it just a joke that some people took too seriously? Weigh in with your thoughts at the C2C Facebook page.

There are no coincidences pic.twitter.com/9AEbbuXZGn