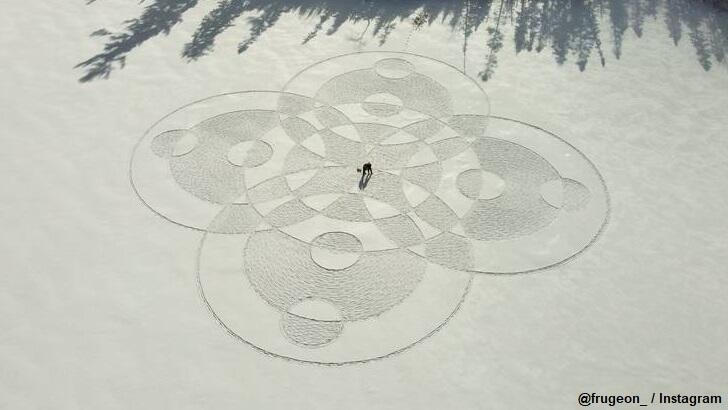 A pair of friends in Canada created an enormous and rather breathtaking 'snow circle' formation atop a frozen pond in Nova Scotia. According to a local media report, the producers of the two-hundred-foot-wide piece are co-workers Matt Robinson and Sheldon Benoit, who have made a hobby out of crafting eye-catching displays in nature over the last years. This particular concept was conceived after the pair drew a sizeable checkerboard in the snow and then decided to take things to another level with an even more fantastic design.

Last Sunday afternoon, the duo descended upon a pond in the town of Debert to, as Robinson humbly put it, "make some circles in the snow." By way of a homemade compass fashioned out of a broken shovel, some piping, and a paracord, they were able to produce perfect circles using snowshoes. Filling in the embossed portions of the design required a whopping 10,000 steps from each of the men and the entire project took about three hours to complete. The pair now hope to go even bigger with their next piece, aiming to create a 'snow circle' measuring around 330 feet wide and likely needing a full weekend to produce.