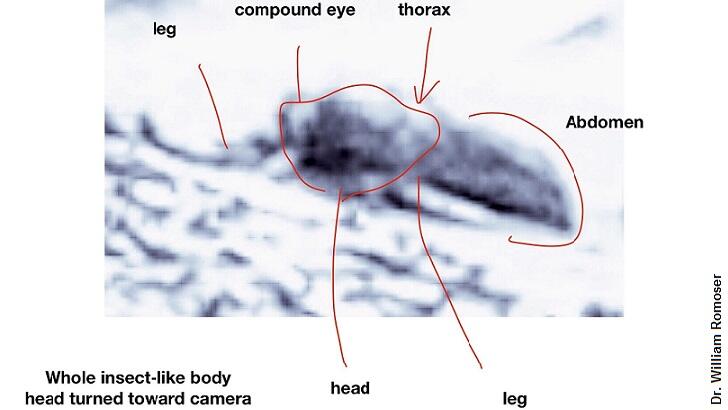 An accomplished entomologist from Ohio University believes that he has found evidence which suggests that Mars may be crawling with insects. The remarkable declaration was reportedly made by Dr. William Romoser in a presentation on Tuesday at the annual Entomological Society of America conference in St. Louis, Missouri. According to the entomologist, he has spent the last several years studying Mars Rover images and, in the process, spotted what he believes to be bugs that were inadvertently photographed.

"There has been and still is life on Mars," Romoser boldly declared, noting that what appeared to be insect-like forms were visible in numerous photos from the Red Planet. He specifically noted that these bugs possessed segmented bodies, wings, legs, and antennae. Explaining that these features are "traditionally sufficient to establish identification as 'insect' on Earth," Romoser argued that "these characteristics should likewise be valid to identify an organism on Mars as insect-like."

Based on his analysis, Romoser posited that the rover images indicated that Mars contained both fossilized evidence for insects as well as an indication that there are such living creatures currently on the Red Planet. He also explained that "particular postures, evidence of motion, flight, apparent interaction as suggested by relative positions, and shiny eyes were taken to be consistent with the presence of living forms." To that end, during his presentation, the entomologist shared images of what he suspects are bee-like insects flying through the air and sheltering in a cave.

Ultimately, in what may be something of an understatement, he mused that "the evidence of life on Mars presented here provides a strong basis for many additional important biological as well as social and political questions." On the face of it, Romoser's research may sound too fantastic to be believed, but it's bolstered by the credentials that he brings to the table, having taught entomology at Ohio University for a whopping 45 years and, during that time, helped to pen four editions of a textbook used by a number of learning institutions. So, at the very least, one would think that his findings would be taken more seriously by the scientific community than a run-of-the-mill anomaly hunter claiming to have found the same insects on Mars.