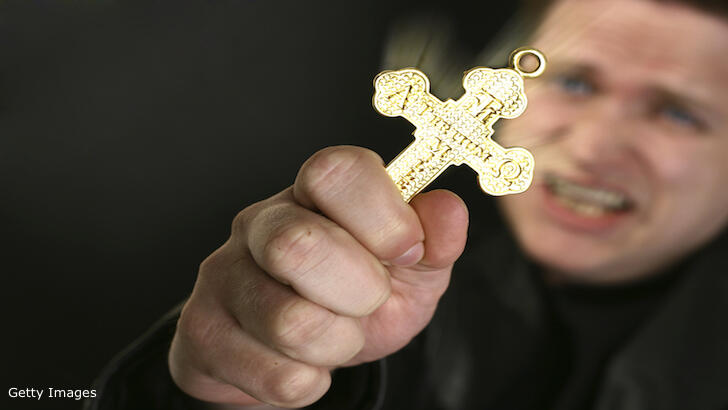 A group of exorcists are sounding the alarm over a children's book that teaches youngsters to summon demons. The troubling tome, titled A Children's Book of Demons, was published back in July, but only captured the public's attention a few weeks ago when Walmart began selling the book. As one can imagine, this sparked a considerable outcry online from people concerned about exposing kids to the proverbial dark arts, despite the fact that the 'spells' contained in the book are fictional and center around things like avoiding chores or besting bullies.

The furor surrounding the book has now reached all the way to Rome by way of a scathing statement from an organization known as the International Association of Exorcists. Group president Father Francesco Bamonte wrote on their website that "you don't mess around with demons. Whoever invites a child to summon a demon is like a person who puts a grenade in their hands to play with. Sooner or later the child will pull the pin and the bomb will explode in their hands."

Bamonte specifically took issue with how the book presents a number of symbols that children are encouraged to draw in order to summon different demons. According to the exorcist, these sigils are remarkably similar to the ones found in genuine magical manuals, known as grimoires. As such, Bamonte chastised the book's author for "simplifying a grimoire as much as possible" and "transforming it into a fun game: the demonic seals act as a 'telephone number,' to contact the spirits of evil."

Ultimately, the exorcist lamented that the book represents the latest development in what he sees as a gradual "project" aimed at making demonic entities more palatable to the public and, eventually, culminating with "the explicit proposal to worship the devil." While Bamonte's lament may have merit, one can't help but imagine that the publishers of the book are probably thrilled at all the free publicity his group is giving to the 'demonic' guide. What's your take on this curious controversy? Weigh in with your thoughts at the Coast to Coast AM Facebook page.