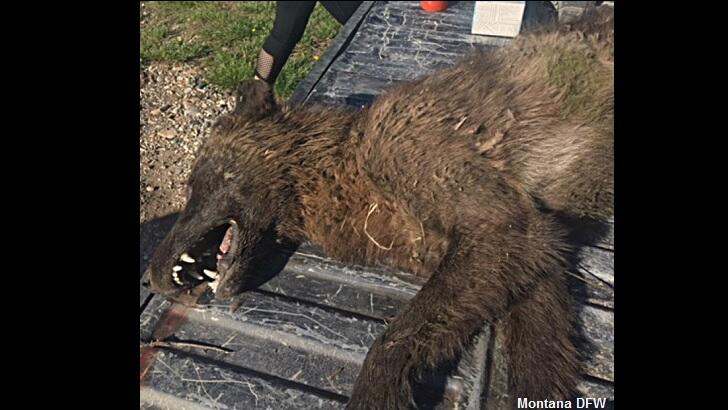 An odd canid of some kind was shot and killed on a ranch in Montana and its unique appearance has left experts baffled as to its true nature. The mysterious creature was taken down on May 16th in the town of Denton when a rancher spotted the beast venturing perilously close to his livestock. The impromptu monster hunter subsequently did his due diligence by phoning the Montana Department of Fish Wildlife and Parks to report the unexpected event.

Officials with the department soon arrived and realized that they had something of a mystery on their hands as the creature's appearance didn't quite conform to one specific animal. Although its head and snout resembled a wolf, which is what the rancher had originally reported, there were other parts of the animal that raised questions about that assessment. Specifically, irregularities with size of the creature's canine teeth, ears, and paws, which were either too small or too big from what one might expect from a wolf.

Somewhere along the line in recent days, images of the animal began popping up online and sparked a speculative frenzy of people offering opinions on the nature of the creature. Among the largely prosaic possibilities were a young bear and a wolf hybrid. Then, of course, there were the more fantastic suggestions such as the dog-man of paranormal lore, the thought-to-be-extinct dire wolf, and, perhaps by some observers who may want to get their eyes checked, Bigfoot.

In response to the clamor generated by the mystery animal, the Montana DFW issued a statement on the case. They explained that, "rather than guess" what the creature was, the department opted to collect the carcass and send it off to a lab for testing. The hope is that DNA extracted from the remains will provide some conclusive answers, although they cautioned the public that it could takes weeks or months before the tests can be done. One can only that the oddity was not a bloodthirsty werewolf, because, if it was, the citizens of Denton may not be able to wait that long to find out.