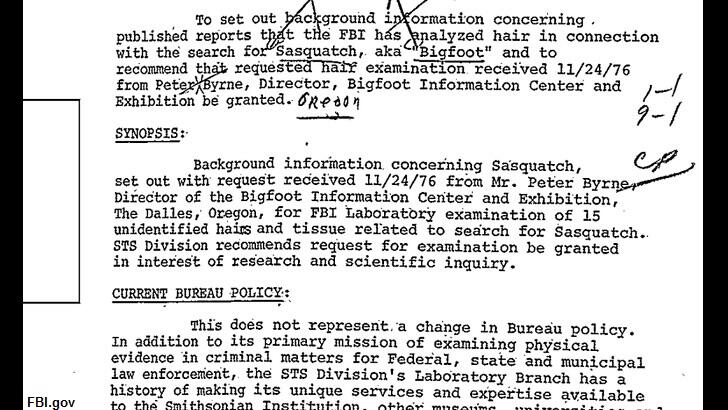 The FBI raised eyebrows online today when a Twitter account devoted to highlighting significant declassified files in their vault shared an odd set of documents devoted to Bigfoot. The strange and fascinating disclosure, which stood out among the normally staid offerings from the FBI Records Vault, concerns a 1976 inquiry from legendary Sasquatch researcher Peter Byrne, who wrote to the Bureau asking about reports that they had tested purported Bigfoot hairs and concluded that they matched no known animal.

This specific claim first appeared in Bigfoot lore via a 1975 Washington State atlas published by the Army Corps of Engineers which stated that such an examination had been done and that the findings were, indeed, quite mysterious. Following up on the fantastic account, Byrne asked the Bureau to "set the record straight, once and for all" about the claim which had captured the imagination of many in the cryptozoological community. Unfortunately for the researcher, the FBI responded that they could find no references to these alleged tests on possible Sasquatch hair in their files.

Since the apocryphal examination had apparently not been done by the Bureau, Byrne then requested that the FBI perform tests on some intriguing hair samples that he had obtained. And, amazingly, they agreed to conduct an examination of the possible Bigfoot evidence, explaining that while the Bureau is primarily focused on criminal matters, "occasionally, on a case-by-case basis, in the interest of research and scientific inquiry, we make exceptions to this general policy." Byrne subsequently sent fifteen hair samples as well as some attached skin tissue to the FBI and the materials, which are actually shown in the recently-released files, were then submitted to one of the Bureau's laboratories.

According to the newly-released FBI file, the examination of the hairs "included a study of morphological characteristics such as root structure, medullary structure, and cuticle thickness." Scientists also compared the materials to follicles from other known animals to see if there were any similarities and ultimately concluded that they were "of deer family origin." Strangely enough, despite going through all that work, the results of the test were apparently never relayed to Byrne, who at the time was out of the country on an expedition to Nepal.

While one might be wondering if there is some kind of connection between the FBI's seemingly inexplicable release of a file concerning Bigfoot with other recent revelations about UFOs, that would appear not to be the case. Credit for putting the Sasquatch files on the Bureau's proverbial radar should go to indefatigable archivist of strange and unusual government documents, John Greenewald, who filed an FOIA request about the tests referenced in the 1975 Washington state atlas many months ago. He actually wound up receiving and publishing the documents at his website last year, although they only caught the attention of the mainstream media when the FBI made note of their release today.