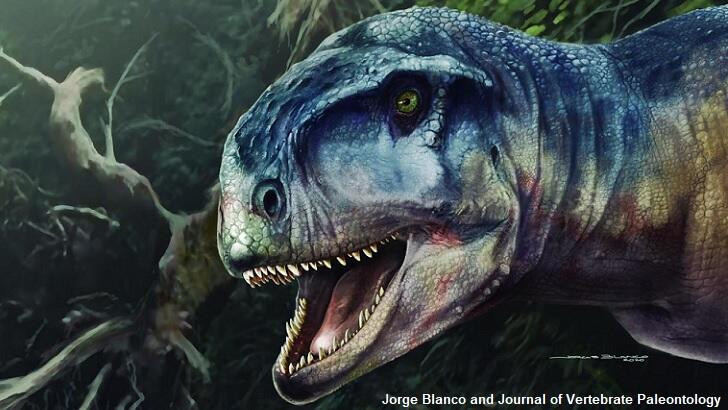 Paleontologists have identified a heretofore undiscovered dinosaur species which bore an uncanny resemblance to the Tyrannosaurus Rex and has been given a rather menacing name. The ancient creature reportedly roamed the Earth approximately 80 million years ago around modern-day Argentina and measured a sizeable 16 feet in length. In addition to its considerable size, the predatory dinosaur also boasted monstrous teeth, a robust bite, and massive claws on its feet. Similar in appearance to the T. Rex, the creature's arms were relatively tiny in comparison to the rest of its body.

Intriguingly, the dinosaur also possessed both a sharp sense of a smell and, based on the somewhat unique shape of its skull, an acute hearing ability which researchers say was a cut above its contemporaries and in keeping with that of modern-day crocodiles. Coming from a carnivorous family of dinosaurs known as abelisaurids, the creature has been given the name Llukalkan aliocranianus. The first half of its name, when translated from the native Mapuche which provided its moniker, means 'one who causes fear' and the latter half denotes that it had a 'different skull.'