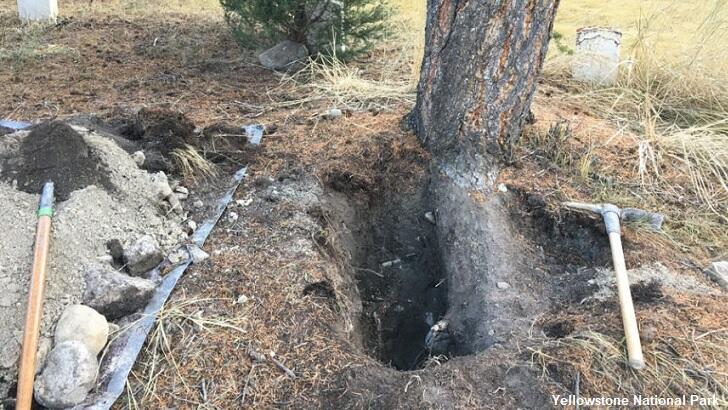 A Utah man busted for illegally digging at Yellowstone National Park in search of the Fenn Treasure has been sentenced to six months in federal prison and ordered to pay a rather hefty fine for the series of ill-conceived excavations. According to a press release from the Department of Justice, back in late 2019 and early 2020, authorities caught Rodrick Dow Craythorn shoveling holes, such as the one seen above, throughout a cemetery located on a former U.S. Army fort situated within the national park. A subsequent investigation found that he was responsible for a staggering "seventeen sites of illegal excavation, including damage to a historic grave."

Craythorn's reasoning for the illegal dig was that he was looking for a cache of riches that had been hidden somewhere in the Rocky Mountains by eccentric art dealer Forrest Fenn. Suspecting that the treasure was located somewhere in the cemetery, he set about digging, but ultimately only wound up unearthing a sizeable amount of trouble. Charged this past September with "excavating or trafficking in archeological resources, and injury or depredation to United States property," Craythorn pleaded guilty to the crime earlier this year and, this week, finally learned his fate.

A federal judge overseeing the case sentenced the treasure hunter to six months in prison as well as six months of home detention. Upon completion, Craythorn will also be subject to two years of supervised release and must pay a whopping $31,566 in restitution. Remarkably, United States Attorney Bob Murray noted that the punishment is inordinately harsh for such a transgression as it is "a crime that a sentence of imprisonment is rarely imposed." However, he argued that in this instance "Craythorn deserves time in a federal prison, no matter the length," likely due to the extreme nature of his treasure hunt.

To that end, the superintendent of the park, Cam Sholly, described the case as "the most significant investigation of damage to archaeological resources in Yellowstone National Park’s recent history." Meanwhile, Yellowstone National Park Chief Ranger Sarah Davis mused that "this is an example of a highly egregious resource violation stemming from the Forrest Fenn treasure hunt saga." In light of the Craythorn case as well as other incidents alluded to by Davis, one imagines that the park is quite pleased that the riches were recovered last June and that the site will likely no longer have to deal with ill-conceived or outright illegal attempts to find it by visitors.

For his part, Craythorn was apologetic for the caper that is sending him to prison, reportedly saying in a statement released by his attorney "to the National Park Service, the people of the United States and my family, I am truly sorry. I was motivated by the thrill of possibly finding a treasure, and my obsession clouded my judgment. after my time in prison, I intend to make full restitution. I can only hope that my case will serve as a reminder to people that we should respect National Parks and the laws that were enacted to protect them." One can only imagine how Craythorn must feel having gone from thinking he was about to find the elusive Fenn riches to now heading off to prison and having to fork over a small fortune of his own.