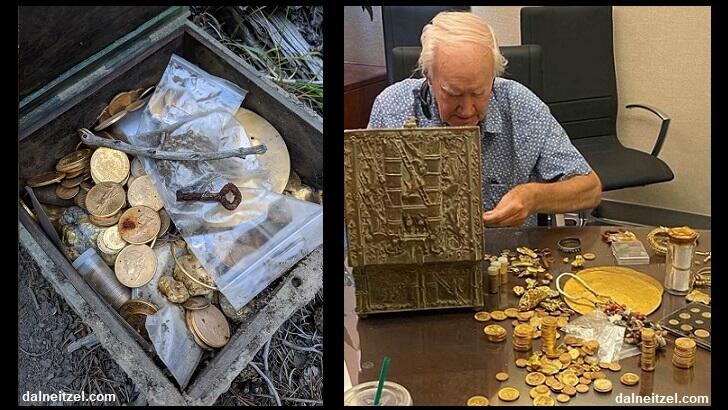 Nearly two weeks after Forrest Fenn announced that someone had found the cache of riches which he had hidden in the Rocky Mountains long ago, the eccentric art dealer has finally released a series of photographs showcasing the elusive treasure. News that the nearly decade-long hunt had come to an end swept over the community of searchers like a tidal wave with many people who had spent a considerable amount of time and money on the chase expressing skepticism about the story and, in some cases, whether or not there really was a treasure in the first place.

Fenn likely squashed a great deal of that speculation this week when he provided three photographs of the treasure to blogger Dal Neitzel. The first image, which shows an opened box slightly caked in mud and containing a variety of gold coins, was described by the author as "the chest taken not long after it was discovered." Another photo features Fenn sitting at a table and pouring over the contents of the rather ornate box with the caption "removing objects from the chest. It is darker than it was ten years ago when I left it on the ground and walked away."

The third image released (seen here) shows him wearing a bracelet that has become somewhat famous in Fenn treasure hunt lore. That's because the art dealer had said on multiple occasions in the past that he hoped that whomever found the riches would return the sentimental item to him. This curious detail about the treasure's contents led many people to suspect that the jewelry constituted some kind of clue. Regarding that image, he wrote "the bracelet on my arm was wet when found. The silver tarnished black."

Beyond those three photos, Fenn shared just a tad more information concerning the individual who solved the mystery, saying "the treasure chest was found by a man I did not know and had not communicated with since 2018." He went on write that "the finder wants me to remain silent and I always said the finder gets to make those two calls. Who and where," with the latter decision being where the treasure had been located. While the photographs will probably satisfy a number of now-former Fenn treasure hunters, the murky nature in which the chase ended continues to be a source of consternation for others.

Understandably, a great number of people in the treasure hunt community desperately yearn to know where, exactly, Fenn's chest had been hidden. To that end, in a testament to their indefatigable nature, some have even begun scouring these new photographs for potential clues as to where the riches were found. However, with the treasure itself having been discovered and no ultimate reward to be attained aside from the knowledge of where it was located for all these years, time will tell how long such enthusiasm will last.

Meanwhile, the publication of the photographs will also likely do little to persuade hardened skeptics who insist that Fenn's treasure was a hoax all along, though one wonders what, if anything, would convince them at this point aside from perhaps the finder coming forward and sharing their story with the world. Such a development would, of course, be welcome news to doubters and believers alike as, until then, the mystery of where the riches were hidden seems destined to remain unsolved.