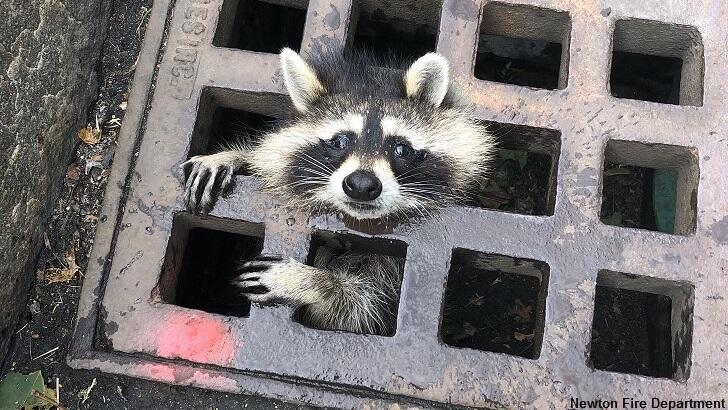 Firefighters in Massachusetts responded to a rather strange call to action this week when they were enlisted to help free a raccoon that had somehow gotten its head stuck in a storm drain. The weird rescue reportedly took place in the town of Newton on Thursday morning after a cyclist noticed the creature's unfortunate predicament and reported it to the authorities. Initially thinking that the animal could be extricated from the grate using soap and water, as is usually the case, the team on the scene were surprised to find that the raccoon was firmly wedged in the hole of the sewer drain.

After a few other methods for freeing the creature also proved to be futile, because the frightened raccoon kept fighting its helpers, the firefighters wound up calling Animal Control officers from the nearby town of Waltham. Upon arrival, a veterinarian sedated the creature, which allowed for rescue workers to remove the 'trash panda' from the sewer drain. All told, the process took a whopping two hours and led to something of a celebration on the fire department's Twitter account where they declared "we rescue citizens both big and small!"